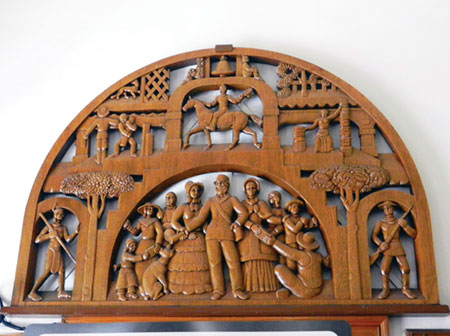 When Russian-born artist Michael Von Meyer settled in San Francisco in the early 1920s, he probably had no idea that his work would still be standing nearly a century after his arrival to the U.S. Of course, Santa Clarans probably see Von Meyer’s piece all the time and don’t realize what they’re looking at since it sits in the most unlikely gallery.

In 1937, the Federal Art Project commissioned Von Meyer to create an arch-shaped wood carving to hang above the Postmaster’s door at the city’s Main Post Office (1200 Franklin Mall). Von Meyer’s initial renderings had to pass three art juries – one in San Francisco headed by Walter Hyde, the director of the De Young Museum, and two in Washington D.C. – before the piece was given the green light and could be installed.

The work of art, carved in teak wood and weighing nearly 300 pounds, “is six feet at the base, by about five feet high” and “represents events in the history of Santa Clara from the period of around 1860,” reads an article from the Santa Clara News dated July 23, 1937. “The artist chose this period so that the carving would conform in idea with the style of the building, which is of the mission type, prevalent in early times.

“Von Meyer, in explaining the work, stated that the design is to show some of the history of the surrounding country,” continues the article. “He said, ‘At the top I put the famous bell of Santa Clara. Directly under the bell is the pony express, to the left a lumberman of the early days and a Chinese – as they performed much of the labor of that period.

“To the right is an Indian woman with her baskets, and below, to the right and left of the large group, are a pioneer and an Indian hunter. The large group represents a postmaster of about 1860 distributing mail to those who come for it.”

The next time standing in line at the post office seems like a chore, put away the smartphone, take a look around, and examine the details of the Von Meyer carving – one of the oldest pieces of public art in Santa Clara.