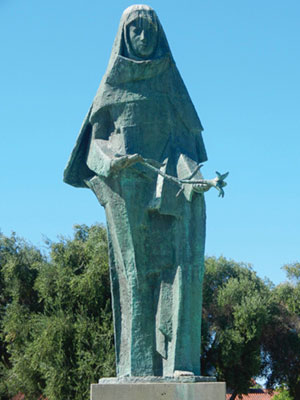 Just down the street from Benny Bufano’s “Universal Child” sculpture at City Hall is Anne Van Kleeck’s contribution to outside art in Santa Clara – a bronze statue of St. Clare, the city’s namesake.

“The new statue honors the quiet, well-to-do, and well-educated 13th century girl who renounced the world of her prominent family and entered monastic life,” reads an article published in the December 1965 issue of the FMC Corporation newsletter. “As a close follower of St. Francis of Assisi, Saint Clare became the inspiration of the Franciscan Brothers and priest missionaries to the Orient and New World. Thus she was considered the mission fathers’ matriarch in heaven, inspiring them to endure the dangers and hardships of mission life.”

To get the project, the Ohio-born Van Kleeck submitted a model, which was put up against more than two-dozen submissions from other well-known artists in the area. But, when it came down to it, her $35,000 estimated cost was much lower than the other top two sculptors ($82,000 and $78,000), and she was given the task of making her mini St. Clare the 20-foot tall sculpture that now sits at the corner of Lincoln Avenue and El Camino Real.

When Van Kleeck was finally commissioned to create the piece, it was August of 1963. Originally, it was estimated that the statue, which was created by a centuries-old casting technique called “lost-wax,” would be completed within a year. However, it took two years and an extra $7,000 for Van Kleeck to finish the project – the three-ton statue, cast overseas, with a green patina finish that is perched atop a seven-foot pedestal to overlook the city.

Just two months into the project, an October 17 issue of the San Clara Journal quotes Van Kleeck as saying, “I’m a fanatic on the St. Clare project…I’m hooked, absolutely hooked.” She also describes the piece as “not for now, but forever,” and says she was creating it to “mean something when they dig US up.”

When the statue was completed in June of 1965, the Santa Clara Journal, again, quotes Van Kleeck. “Words can’t express how I feel today,” she says. “I’m glad it’s finally going up. I can get no satisfaction until it’s actually standing.” And, while St. Clare was up soon after the article ran, the sculpture wasn’t dedicated until October 10, 1965 at an event celebrating the completion of the art piece and Civic Center Park that was attended by the local dignitaries of the time: Mayor William Wilson, Jr., Director of Parks and Recreation Earl Carmichael, City Councilman Lawrence Fargher, Mayor’s Statuary Committee member Austen Warburton, and the Lieutenant Governor of the State of California Glenn Anderson.

While some may see the piece as awkward and bulky, St. Clare is there to simply remind Santa Clarans of the city’s rich history and deep connection to the Catholic Church and California Missions.