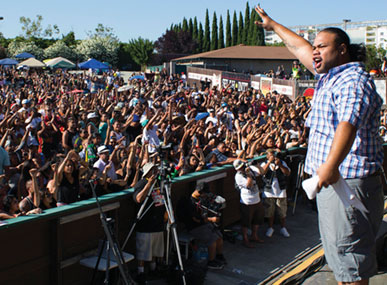 “With Polynesians and our size, there’s a misconception that we’re rowdy,” said Perez. “We look rowdy – I get that – but when you have events with 8,000 people and there are no hiccups, we can’t be that bad. That’s another thing. I want to [use this event] to shed a positive light on Polynesians. We are actually happy people. We aren’t rowdy people.

In its first year, the show nearly sold out, and this year, there weren’t enough tickets to go around. People traveled from as far north as Washington State to see the event. And, while Great America is unable to accommodate a larger group, Perez is considering making next year’s festival a two-day event to further showcase reggae music to the South Bay audience.

Arts & Entertainment Community
Author Diane AndrewsPosted on May 25, 2016
What would it be like to be “Alice (or Alex!) in Waterland?” Girls and boys, ages five to eleven, can experience what it’s like...