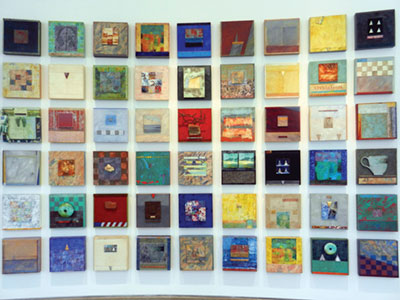 To celebrate a career spanning nearly 50 years, the Triton Museum of Art is exhibiting Salvatore Pecoraro’s “Journey with an Edge: 1963-2012” now through September 1.

One of the most poignant pieces in Pecoraro’s show is “365 Skies,” which covers nearly two full walls in the museum’s Permanent Collection Gallery. “In 1970 Pecoraro devised the concept of ‘365 Skies,” reads a plaque on the museum’s wall. “Each day of the year he would take a photograph of the sky and then do a one-foot-by-one-foot painting of this favorite shot for that day. At the end of that 12-month period, he would have 365 unique paintings that he would display as one large-scale work of art.

“In a recent exclusive interview, he recalled the genesis of the idea, ‘When you’re young, everything moves at the speed of light and the idea evolved in the latter part of 1969. I had been painting skies, hard-edged paintings, and they were very abstract and not objective looking things.’ Pecoraro recounted how he became so focused on that singular element of his future work saying, ‘The more I evolved into the sky being a major part of the work I was doing in the middle of the ‘60s, the more I became involved in isolating it by itself.’”

Four stools have been set up in front of this piece, prompting visitors to sit back and examine the skies – from dawn to dusk and crystal blue to murky gray, every type of sky encountered throughout the year is represented. It’s one of the simplest, yet most thought-provoking pieces in the entire exhibit. Hours can be spent following the sky’s progression over 365 panels and an entire year. 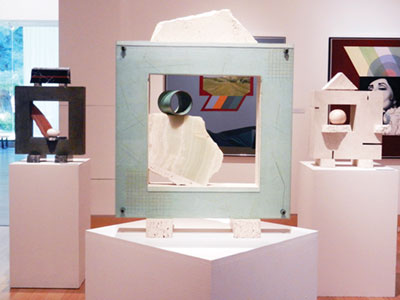 Much of Pecoraro’s work has a light, airy feel. Even when Pecoraro’s paintings contain darker hues, there’s a feeling of happiness and peace within each painting or sculpture. His work is refreshing and the exhibit quickly puts the viewer at ease, giving them the opportunity to focus on Pecoraro’s style and technique instead of forcing them to figure out why they’re suddenly uncomfortable and unable to handle the subject matter.

“I work in a succession of series to innovate upon my own practice, revisiting past work to reincorporate elements into my present,” reads Pecoraro’s artist statement. “I see my art practice as a long succession of advancement, much in the way you build upon previous theories in science. I set out to master mediums that inspire me, which has led to my diverse body of work using painting, drawing, photography and sculpture. Everything I’ve learned and created in the past shows up in my current work, and I remain influenced by work I completed decades ago. It’s a cyclical process like time itself.”

Pecoraro’s public art sculptures can be seen at DeAnza College in Cupertino, IBM Corporate in San Jose and the Sunnyvale Community Center. The Triton is at 1505 Warburton Ave. in Santa Clara. Visit www.tritonmuseum.org for additional info.