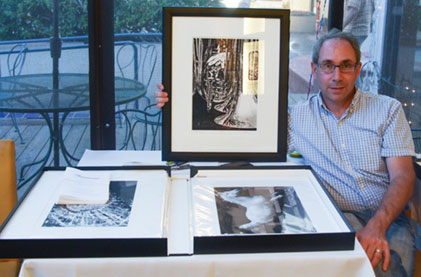 Sacks is one of four photographers featured in the “Harmony III” show, which is the fifth in a series of on-going fine art photography exhibits featuring photographers who have studied pre-visualization with Richard Dischler for two or more years.

“Photography has always been a passion of mine,” said Sacks, “and I was first inspired by an uncle who worked as a professional photograper.” Sacks’ contribution to the show are black and white images – a broken window; close-up of an Arabian racehorse named Tehillah (In a Heartbeat); his wife; a rock smashed against a windshield, and a butterfly.

“Most [of the photographs] weren’t overly planned, but they did use techniques taught in Dischler’s pre-visualization workshops,” said Sacks. “For instance, the window and the butterfly both caught my attention, but then it was a matter of getting the correct shot, while the photography of Tehillah and the rock were planned before I even took my camera out. I had an idea of what I wanted to photograph. [The photo of my wife] wasn’t planned. It was very spontaneous and worked out well.”

Sacks’ work can be seen now through October 7. To learn more about the pre-visualization workshops caught at Keeble and Shuchat Photography in Palo Alto visit www.kspphoto.com, and to see more of Sacks’ work visit www.LarrySacksPhoto.com.

The Lyra Tones Play Concerts in the Park

Arts & Entertainment
Author Erika TownePosted on December 14, 2018
For the past 45 years, the Santa Clara Ballet has thrilled local fans with its annual performance of The Nutcracker, but this season’s performance...