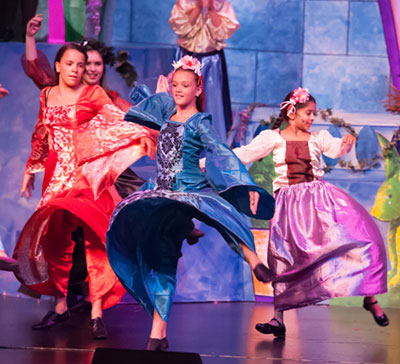 It’s a common story that transcends cultures and generations: A domineering mother, and an all-too-silent father want their child to be married. But the mother wants complete control over who the lucky woman will be, since she knows no one will be able to love and care for her son the way she can. With the bar set so high, a future of wedded bliss seems daunting, if not impossible, for her son. As each potential bride comes forward, none are able to meet mother’s strict standards. In the mother’s mind, questions like, “What was the middle name of the daughter-in-law of the best friend of the blacksmith who forged the sword that killed the beast?” seem ordinary and mundane.

So goes the musical farce, Once Upon A Mattress, performed by Starting Arts last week at the Performing Arts Center at Santa Clara High School. Mattress is an adaptation of the fairy tale, The Princess and the Pea, by Hans Christian Andersen. The production follows in the footsteps of other Starting Arts works by being extremely well-produced; with outstanding acting, singing and dancing, which made the effort to circumnavigate the Santa Clara High School campus around the on-going construction worth the effort. 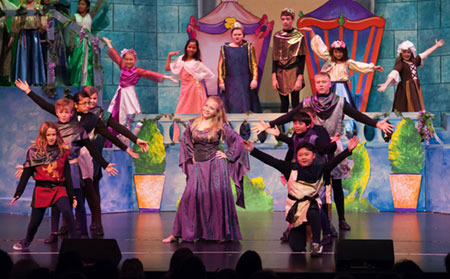 Mattress opens with the Minstrel, our guide for the show, telling the tale of a Princess, being tested by Queen Aggravain, to see if she is fit to marry her son, Prince Dauntless the Drab. The King is silent because of a curse placed upon him that can only be removed when a mouse devours a hawk. Naturally, Princess number 12 fails the test. But all is not merry in the Kingdom, as the Queen has declared no one can be married until the prince is wed. Good Sir Harry, upon learning Lady Larkin, his girlfriend, is pregnant, due to “her own fault,” decides to find a princess for Dauntless so he and Larkin can be married. Harry brings back Princess Winnifred the Woebegone, who is so eager to meet Dauntless that she swims across the moat. Her brash style and lack of lady-like manners help the Queen devise a seemingly impossible test for Winnifred. The Queen places the tiniest pea under 20 mattresses and declares if Winnifred is unable to sleep, then she is sensitive enough to marry the prince. With her plan in place, she feels confident that once again, the latest princess will fail. However, when Winnifred walks in, still counting sheep from the night before, the Queen tries to stop the marriage. That’s when Dauntless (the mouse) speaks up against his mother (the hawk) causing the curse on his father to be placed upon his mother. With the King’s blessing, Winnifred and Dauntless are allowed to marry. At the end of the show, the real reason Winnifred passed the test is revealed, as all the weapons, vases, scales and other large objects are removed from the mattresses.

Once Upon A Mattress ran for six shows over three days, July 11-13. For more information on Starting Arts visit www.startingarts.com.

Arts & Entertainment Community
Author Melissa McKenziePosted on August 9, 2018
Seventeen-year-old Wilcox High School senior Sanika Kamde began showing an aptitude for the arts at the young age of six. Her mother, not wanting...
Arts & Entertainment
Author Karl ScottPosted on April 6, 2011
One of my all time favorite films, and not just Christmas films, is probably one of yours too. Bob Clark’s 1983 film A Christmas...

Arts & Entertainment Community
Author Diane AndrewsPosted on September 16, 2020
Santa Clara’s 2020 Parade of Champions is marching on virtually on Saturday, Oct. 10 at 11 a.m. and has expanded to include a city-wide...
SPONSORED