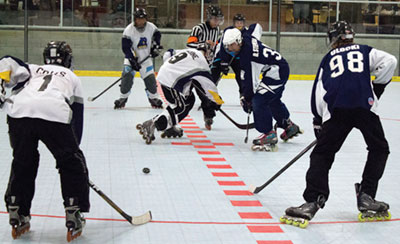 The embattled Santa Clara High School athletics program has one shining star – one team that has risen above the rest and won championships in its sport.

The Santa Clara Bruins Roller Hockey team might just be the best-kept secret in Santa Clara sports. However, the team, which has won five championships in nine years, isn’t supported financially by the athletic department, doesn’t play in CCS, and has players who are unable to letter in the sport, but the boys and girls on the team are passionate about playing together.

“Unlike a lot of sports we don’t bicker,” said junior Nick Chapin. “No one hates each other on the team. We laugh in the locker room…No one is full of themselves.”

“[We are successful because] we get along,” added senior David Coats. “We work together. We love the game.”

Because SCHS doesn’t have a roller rink, and rink fees are costly, the team only practices on Mondays – all on their dime. And, in order to stay sharp and improve their game, many of the players participate in pick up games throughout the week and adhere to their own conditioning program.

“Since we only get together one day a week for practice, they improve themselves or as a team as much as they put into it,” said head coach Mark Shimada. “So them being self-motivated to get in shape and get better, that’s what motivates us.”

All of the hard work and dedication gave Santa Clara one of its best seasons since the team’s inception in 2005 – a 9-1 record and a first round bye in the playoffs, which were held on Nov. 16.

After Santa Clara beat Willow Glen 3-1 in the Division II semi-finals, the Bruins took on their foe, Branham, in the championship game. Branham got on the board with eight minutes left in the first period, before Freshman Brandon Chapin and brother Nick Chapin scored goals to take a one-goal lead. But, with just two minutes left in the third and final period, Branham tied. About a minute later, Branham got the go-ahead goal, leaving Santa Clara visibly shaken, but the Bruins wouldn’t go down easily. With 25 seconds left in the game, Brandon Chapin got the tying goal that sent the game into overtime. It was anyone’s game. Despite the fact that Santa Clara had beaten Branham twice during the season, the rivalry between the teams is fierce and neither team was going to go down without a fight. Unfortunately for the Bruins, Branham scored early in the overtime period and won the championship 4-3.

“Emotions came over me a little bit,” said senior goalie Tyler DiLorenzo. “I kind of wasn’t all there because of the two goals late in the game but we played hard. I thought we all played good and I feel like I could have played a little bit better, but what are you going to do? It just happens…Overall, 10-2 including playoffs is pretty good. I’m happy with what our team is doing. I just know that we can improve in the future.”

“I couldn’t be prouder of the guys,” said Shimada. “We had a pretty late start in the first game, but came on strong in the second and we played a Branham team that is just on a hot streak right now…It was the two best teams that met in the championship and, to no surprise to anybody, the game could have gone either way…They’ll be back.”

SCHS, which has three seasons each year, will begin its second season in December.

Charging to Victory: Chargers Demolish Bruins in Annual Match Up

Sports
Author Larry SacksPosted on June 7, 2017
What many people probably don’t realize is that the Santa Clara PAL BMX Track is now ranked as the top track in the state...

Community Sports
Author Cynthia ChengPosted on March 13, 2013
Back in February, many football fans enjoyed the Super Bowl from their homes as they watched the San Francisco 49ers battle against the Baltimore...

Sports
Author Andrew BenschPosted on November 30, 2016
Luis Lujan has been coaching Wilcox soccer in various roles since 2006. After years of coaching junior varsity, he now takes over as Head...
SPONSORED