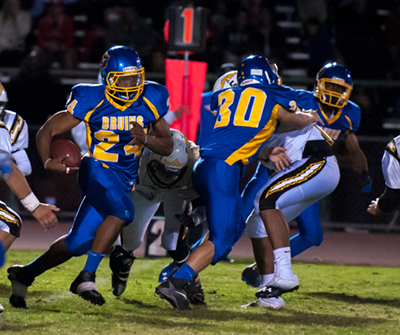 It was 1984 when the Santa Clara High School Bruins last beat the Wilcox Chargers.  So, when the teams met up for the annual Mission City Bowl on Nov. 8, Santa Clara had something to prove. Would this be the team that finally knocked down the mighty Chargers?

It didn’t take long for that question to be answered. And, on a night when Santa Clara honored former principal Don Bordenave by renaming the field in his honor, the Chargers dominated the Bruins with a 68-10 victory.

Wilcox scored fast and often, with the team’s first touchdown coming on a one-handed catch by senior Sione Finefeuiaki. Senior Delshawn Mitchell followed it up two and a half minutes later with a 70-yard touchdown run.  Wilcox then scored again on a touchdown by sophomore Julian Jones.

The second quarter started with senior quarterback Kenny Dipko rushing for 37 yards and a touchdown. Mitchell scored on the two-point conversion attempt. Mitchell then recovered a fumble and scored on a 40-yard rush, giving Wilcox a commanding 33-3 lead.

Mitchell scored again on a 20-yard rush, followed by Dipko with a 50-yard rushing touchdown.  With a 46-3 lead, Dipko was done for the night, but junior Johnny Carmack picked up where he left off. Minutes after entering the game, Carmack handed the ball to junior Blajon Lux who ran for 15 yards and another Wilcox score. 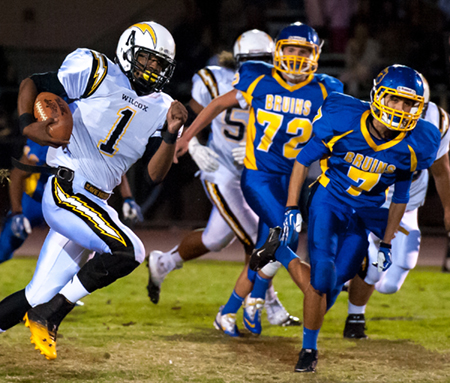 When senior Robert Bowles kicked off, there was a glimmer of hope for the Bruins. Senior Adam Garza caught the ball at Santa Clara’s 10-yard line and hustled his way through the pack, dodging defenders when necessary, and running for 90 yards and the Bruins’ only touchdown of the game.

“We’ve had a lot of injuries,” said junior Marco Delcourt, rationalizing the loss. “I’m injured and I was a starter…We’ll be back next year.”

Celtics Top Eagles in Final Game of the Season

Sports
Author Andrew BenschPosted on February 17, 2017
Senior night for the Wilcox girls soccer team didn’t end with a victory, but their progress this season from start to finish has been...

Sports
Author Andrew BenschPosted on April 25, 2018
After winning just once in their first three contests, the Santa Clara Bruins have won four-straight games, improving their league record to 5-2. Over...