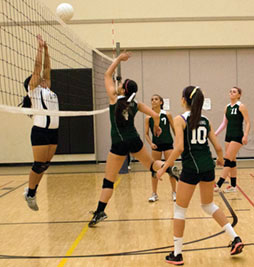 Despite a handful of errors in the first couple of games, including a service error to give LCPA the first game victory, the Celtics really found their stride in games four and five.

Game four began with senior Brooke Burgos at serve. The Celtics’ captain started the team off with six unanswered points, including four aces. Burgos would end the night with a whopping17 aces (58.6 percent of her total serves), 12 kills, and 11 digs.

At 13-4, with St. Lawrence already racking up a sizeable lead, freshman Monica Hrncir, gave the Celtics an additional seven points, three of which came from ace serves, to put the team up 20-4. LCPA tried to get into the game, but the best the team could do was add four points to their total before St. Lawrence ran away with the game.

Burgos opened the fifth game for the Celtics with four straight aces, but a missed tip by Hrncir caused a side out. When Hrncir was at serve, St. Lawrence had a 9-4 lead. Hrncir scored five points, including four aces to put the team at game point. But, a side out by LCPA would keep them from celebrating too soon. On the next play, Burgos nailed a kill to give St. Lawrence the win.

“They started off really rough,” said second year head coach Claudia Hall. “We slacked in the first game and came back for the second. In the third [game] we did the same thing again, and just expected to win. In game four, after talking to them and telling them that we needed to show that we were ready for playoffs, they stepped it up and that’s where we saw the change…We had a lot of great hits. We had a lot of great serving. We just missed on our passing and playing the lines. We let them basically squeeze the lines on us, and we needed to play all the lines and all of the balls and not let them drop.”

Hrncir ended the night with 14 ace serves and five kills. Senior Kylie Bragg led the team in kills with 18 and senior Kayala Alvarado had 11 kills, one ace, and six digs.

The Celtics end the season with an 11-6 overall record (10-2 in league). St. Lawrence began its playoff run by taking on Summit Preparatory on Nov. 4 afetr press time.

Charging to Victory: Chargers Demolish Bruins in Annual Match Up

Sports
Author Andrew BenschPosted on October 29, 2019
Despite their offense being unable to pick up a single first down until just before halftime, the Santa Clara Bruins were in a dog...

Sports
Author Andrew BenschPosted on May 6, 2020
There might not be a combination of two sports, or (in the case of track and field) events, that complement each other more than...
SPONSORED