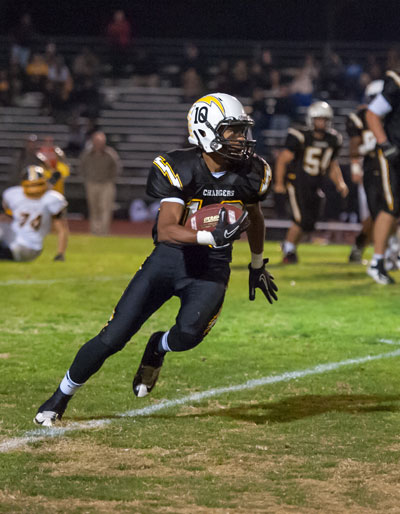 It was a perfect homecoming for Wilcox High School as the Chargers beat the Mountain View Spartans 50-0 on Oct. 25.

On the first drive of the game, the Chargers marched down the field, chipping away at yardage until senior Sione Finefeuiaki found his way into the end zone.

Mountain View was then held to a fourth down situation, where the team went for it, fumbled on the snap and Wilcox sophomore Julian Jones recovered, giving the team great field positioning.

Senior Dominick Bailey, who had 74 yards on three receptions, went 40 yards on a pass from senior quarterback Kenny Dipko for Wilcox’s second score of the night. Chargers’ senior kicker Robert Bowles then hit a 31-yard field goal to put the team up by 16 at the end of the first.

Bailey caught a 20-yard touchdown pass to start the second quarter, and a Dipko to Finefeuiaki pass sealed a two-point conversion.

Senior Delshawn Mitchell, who rushed for 170 yards on 12 carries, did his best Barry Sanders imitation, losing yardage, weaving in an out of defenders, and breaking tackles until he found a hole and ran for 57 yards and a touchdown. Unfortunately for Wilcox, an illegal block in the back was called and the touchdown was overturned. However, two plays later, a quarterback keeper allowed Dipko to run 59 yards for a touchdown.

Mitchell then scored on a one-yard over-the-top plunge into the end zone. The senior running back and defensive back, was stellar on both sides of the ball. Late in the second quarter, Mitchell stripped the ball from Mountain View, recovered the fumble and ran 45 yards for a touchdown and a 43-0 lead that carried into halftime.,/

In the second half, the Chargers and Spartans played with a running clock, and both Dipko and Mitchell were done for the night, giving junior Adam Hernandez his shot under center.

Senior Corey Barraclough intercepted Spartans’ quarterback Ashley Anthony Avery in the end zone for a touchback, and while Wilcox was unable to score in the third, the team kept the Spartans off the board.

To start the fourth quarter, Wilcox’s third string quarterback, junior Johnny Carmack, got his chance to play. Carmack, who had 19 yards on four carries, ran for 16 yards and the final touchdown of the game.

The juniors took first place in the float competition, followed by the seniors, sophomores and freshmen. The juniors were also victorious in the skit competition. The seniors won class yells and dress up days.

Celtics Top Eagles in Final Game of the Season

Opinion Sports
Author Aubrie TolliverPosted on June 22, 2016
My shirt was drenched in sweat and covered in dirt. My legs could barely support the weight of my body. I was counting down...

Sports
Author Larry SacksPosted on May 21, 2014
There were no big surprises in the Wilcox Chargers versus Santa Clara Bruins boys volleyball match on May 7, as the 13-7 Chargers were...

Sports
Author Andrew BenschPosted on January 30, 2020
An often heard cliché in the sporting world is “you make your own luck,” but in the case of the Wilcox Chargers, their poor-luck...
SPONSORED