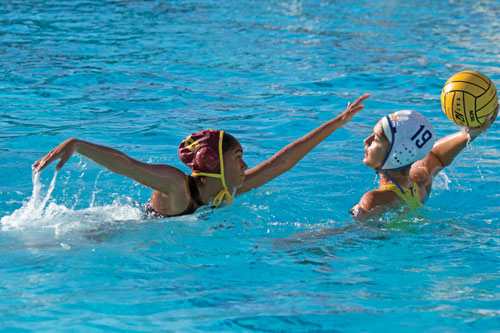 The afternoon of Oct. 17 started slow for the Santa Clara High School Bruins girls water polo team (6-3), but the team pulled it together for a 10-5 win over the Cupertino High School Pioneers.

Early on, the girls maintained control of the ball, but were unable to get shots off. It wasn’t until there were three minutes left in the first when freshman Madison Higginson got the first goal of the game. Higginson, who scored three goals in the first half, and four in the game, nailed her second shot with under a minute and a half in the first and her third at about the three minute mark in the second.

Cupertino, who was having a difficult time offensively against a pesky Santa Clara team, managed only two goals in the first half (senior Brittany Rodriguez and freshman Anna Rajarantanam) – one in each period.

Junior Jazmin Taypan scored with four and a half minutes left in the first and junior Emi Sugiyama, made a super shot at the first half buzzer to give the Bruins a 5-2 lead at halftime.

“As a coach, you want them to rebound [from a slow start] quickly and they did,” said head coach Aja Bumbaca.

The Pioneers tried to chip away at Santa Clara’s lead, but could only muster three additional goals (Rodriguez, senior Gayatri Sabne, and Ragarantanam), one of which came as the clock was ticking down.

Higginson started the Bruins’ second-half scoring with a goal at the two-and-a-half minute mark and Taypan got in another near-buzzer beater at the end of the third. Junior Janel Pascual rounded out the scoring with three goals to close out the game and ensure the victory for SCHS.

“We worked on getting [Pascual] in position this week,” said Bumbaca. “It was her first time in the hole…She did good.”

Santa Clara hosts Harker on Oct. 22 (after press time). “For the last two games this season we’re going against the top two teams,” said Bumbaca. “We have such a young team…We need to work on communication…[and] getting intensity quickly. We need to come out of the gate hard…There are no easy games in this league…[but] we’ve been doing really well this season…It’s exciting.”