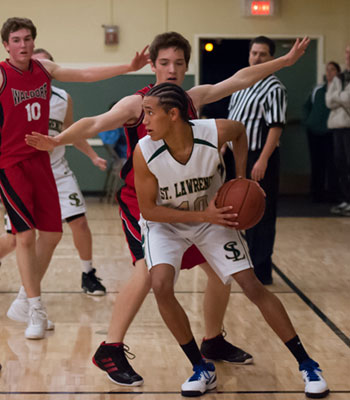 The St. Lawrence Boys Basketball team is on a roll after overpowering Waldorf of the Peninsula (Mountain View) in a 47-32 victory on Dec. 5 and moving to a 2-0 overall record.

Although the game started off slow for both teams, it picked up in the second half, with the Celtics scoring 11 points in the third and 18 in the fourth quarter to Waldorf’s 10 and 11 points during the same two periods.

Leading the way for St. Lawrence was senior Zach San Diego, who scored 17 points, picked up three rebounds and was 75 percent from three-point range. San Diego also had a beautiful assist in the fourth quarter when he stole the ball and passed it down the court to senior Brian Guevarra who easily made a layup to give St. Lawrence an 11 point lead.

Likewise, Guevarra, who had eight points and 11 rebounds in the game, had a spectacular buzzer beater at the end of the third quarter – one that gave the Celtics an eight-point lead. Juniors Ryan Guerra and Joseph Wang added nine points and seven rebounds, and nine points and eight rebounds to the Celtics’ game totals.

Throughout the second half, Waldorf only got within five points once – near the end of the third quarter – but San Diego quickly pushed the Celtics’ lead up to seven with a three. In the fourth quarter, St. Lawrence maintained at least a nine-point lead throughout and pulled together to cause multiple jump ball opportunities and turnovers.

“We had a slow start and missed quite a few shots early on, but the team came together in the fourth quarter to secure the win,” said head coach Joe Endaya. “The boys are still working on their timing and execution on offense, but I’ve been impressed with their effort and communication on the defensive end through the first two games.”

St. Lawrence hosts Summit Preparatory on Dec. 10 (after press time) in a non-league matchup. Summit is coming off a 79-25 loss to Los Gatos.

Sports
Author Andrew BenschPosted on December 8, 2022December 7, 2022
The Wilcox girls varsity basketball squad fell to 1-2 on the season after Tuesday’s home loss against Carlmont. A 45-23 final in the non-league...

Sports
Author Andrew BenschPosted on November 21, 2022
Despite being the No. 1 seed in their CCS Division II bracket, the Wilcox Chargers saw its season end Friday night at the hands...
SPONSORED