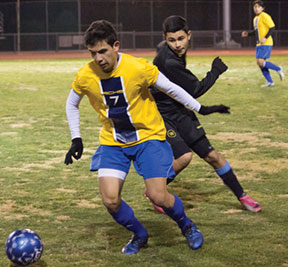 In a pre-season scrimmage, the Santa Clara Bruins beat the Wilcox Chargers 2-0 on Dec. 10.

During an extremely physical game, one in which the Chargers picked up six yellow cards to Santa Clara’s one, the Bruins controlled the ball and continually pushed toward the goal. If it weren’t for heads up first half play by senior goalkeeper Jonathan Mendoza, the game could have easily gotten out of hand.

Despite the calls mostly going in Santa Clara’s direction – including many missed calls that could have been game-changers, the Bruins showed determination throughout.

After a scoreless first half, Santa Clara was given a penalty kick on a curious call by the referees. Junior Kelvin Skews lined up on the spot to take his shot. Skews tested the spot, backed up and sent a line drive to the left of Mendoza. Mendoza guessed correctly and dove to make a brilliant stop to give the Chargers some momentum.

Minutes later, however, Mendoza blocked a shot but mishandled the rebound, giving the Bruins their first goal of the night.

As play progressed in the increasingly cold weather and time ticked off the clock, the Bruins worked on scoring a deal-sealer. On the other side of the ball, Wilcox was hungry to find the equalizer. With only a handful of minutes remaining, Santa Clara senior Leo Hernandez snuck the ball past Mendoza to give the Bruins the security they were looking for and the 2-0 win.

“It was a physical game,” said Wilcox first year head coach Alessandro Stavoli. “We just mentally weren’t ready, but it helps us prepare for the season. It’s a game situation that we’re going to learn from.”

Chargers-Warriors Play to a Draw

Sports
Author Andrew BenschPosted on November 23, 2016
On election night in the United States, the Mission College women’s basketball team embodied many of the same elements of its country. They have...

Sports
Author Andrew BenschPosted on April 26, 2017
Many in attendance at the Silicon Valley Roller Girls (SVRG) season opener on Saturday needed a crash course in a sport built on women...

Sports
Author Andrew BenschPosted on March 7, 2019
With his extensive experience allowing him to show pitchers the subtle differences between the four-seam and two-seam fastballs, one could say Bruins’ Head Baseball...
SPONSORED