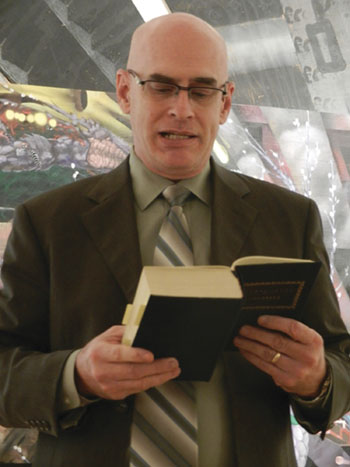 James Joyce’s Ulysses is considered one of the greatest works in literature. The book, which follows the thoughts and actions of one man, Leopold Bloom, for an entire day, was the subject of the Triton Museum of Art’s latest installment of its art and literature series.

On Nov. 7, Chief Curator Preston Metcalf discussed what was going on in the art world during the time Ulysses was written and how art, science, and literature were evolving and changing perceptions – and likewise changing realities.

“Now the years, 1904, 1905, [and] 1906, these are some remarkable years for changing the way that we look at art in the world,” said Metcalf. “We have James Joyce giving us Leopold Bloom, where we get every thought, every action, every description – in other words, we’re looking at a complete human being over the course of one day. We also have, in 1905 – one year later – Albert Einstein publishing his theory of relativity. This was something that he was writing in 1904. Then the other big change comes along – Pablo Picasso, who started his explorations in 1904 and would burst into the art world in 1906, with the invention of cubism. These three men were not affiliated with each other. They certainly did not know of each other’s work before it was created.”

Joyce gave readers a comprehensive picture of a man – showing him at every angle. Picasso painted objects from every angle at the same time. Einstein’s theory was that if you could travel at the speed of light you could see all sides of an object at once. These were all the same concepts, written in different “languages,” during the early 1900s.

And while Picasso and Einstein were revolutionary, it was Joyce who provided the message – the life lesson.

“The last chapter, the chapter that everybody really buys the book for, is the chapter called ‘Penelope’ and this is a 70-page chapter with only one punctuation in it – the period of the very end…Leopold has come home,” said Metcalf. “He has saved Stephen Dedalus. He has become Dedalus’ guide. He’s taught Stephen, in one night, how he can become a true human being. Before Stephen was callow, arrogant, selfish, [and had] animal instincts. After his encounters with Leopold Bloom, Leopold Bloom protects him, saves him, guides him, takes him to his home to help him sober up, and he shows him the way to becoming a good human being – a compassionate human being…This is the story that we have that runs through all great literature. Every single one of these works that we’ve talked about, every single one has the same theme – how do you leave the animal instincts to become a compassionate human being? And there’s always a paragraph, a chapter, a section of the book that will tell you…the greatest idea in all art whether it’s literary musical or other is, ‘how do you become a better human being?’ That’s our story.”

Nov. 14 is the final lecture in the art and literature series, exploring Sherlock Holmes. The lecture begins at 7 p.m. Drop in fee is $20. Visit http://tritonmuseum.org/education_adults_arthistory.php for more information.

John Robert Peck Paints His Way Into the Triton

Education, Creation of Art Among Topics at Triton Lunchtime Event

Arts & Entertainment
Author Melissa McKenziePosted on September 11, 2013
Santa Clara’s Triton Museum of Art was named after a horse. Many may have initially thought the museum was named after the Greek god...

Arts & Entertainment
Author AdminPosted on September 7, 2011
Kevin Cornelius, the gifted producer of the Roberta Jones Junior Theater, had another hit on his hands on August 27, 2011 at the talent...

Arts & Entertainment Op-Ed
Author Carolyn SchukPosted on December 23, 2021December 22, 2021
We’re all happy to see the return of holiday traditions this year — at least, insofar as Omicron allows us. For some of us,...
SPONSORED