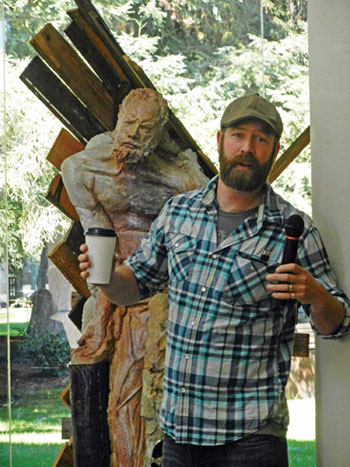 Art lovers brought their lunches to the Triton Museum of Art on Nov. 13 for the museum’s first-ever Brown Bag Lunch. The new program, one of many the museum has been rolling out, featured artist Yori Seeger, who discussed his current show, Reliquary.

In an informal and informational talk, guests first learned that Chief Curator Preston Metcalf and former Executive Director George Rivera were excited to give the artist an opportunity to show his work.

“We get more than 1,000 requests a year, for maybe a dozen slots…and [Seeger] sat down with me and George Rivera and we both said the same thing,” said Metcalf. “We had known his work, and we both said this needs to be a show. Every once in awhile we run across an artist at the early side of their career and we say, ‘this artist needs to have attention.’ And, that was Yori. It’s rare, but it does happen…And, he gave us a stunning show.”

Seeger said that when he was given the show he had nothing created, and that all of the works presented were made within the last two years. During that time, however, he realized that each of the pieces he was creating for Reliquary contained a central theme: education.

“If you look at all of the titles of the works, they’re related to education, and it’s more about the loss of education, or the need to establish a new form of education,” said Seeger. “Like most things, as they evolve, there’s an established routine. Every once in awhile, it’s really important to take a step back, look at that routine and figure out what needs to be changed.”

As part of the need for a change in education, Seeger and his wife, Dana, are starting a school, the School of Visual Philosophy (www.schoolofvisualphilosophy.com) to “make a difference that people can relate to,” and to bring back the art of apprenticeship.

Seeger also explained that the show was about more than the 12 pieces submitted and their reflection on the educational system. “[Working on this show] led me to realize that the final product of something wasn’t that important,” he said. “The thing that’s important to me, as an artist, is the act of creating, and then the act of conversation. So, the end that came from each of the works is that hopefully a viewer will see the work and a conversation will start between the work and the viewer.”

Reliquary runs through Dec. 1 at 1505 Warburton Ave. in Santa Clara. Visit www.yoriseeger.com for more information about the artist.

Arts & Entertainment
Author The Santa Clara City LibraryPosted on November 1, 2017
The Triton Museum of Art got into the Halloween spirit with its annual Halloween party on Oct. 26. Art projects, face painting and outdoor...

Arts & Entertainment Schools
Author Maria JudnickPosted on December 28, 2016
“The time has changed, winter is definitely on its way. This is the season of transitions, gatherings of family, friends featuring feasting, friendship,...