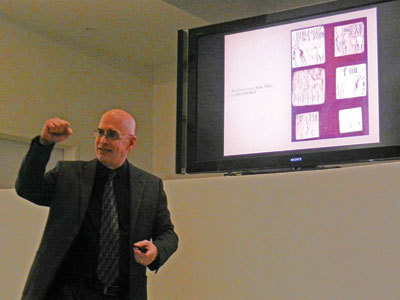 Horns, moons and snakes weren’t always devious symbols and when looking at artistic expression, there are two ways to determine its meaning. The first is on a cultural level where symbol depicted will often have different meanings in various cultures. The second is on an elementary level. The elementary level is where the real symbolism is found. Such were the ideas stressed by the Triton Museum of Art’s Chief Curator Preston Metcalf on Thursday, January 12 during the kick off of the museum’s lecture series, the Hidden Symbols of Art.

While symbols are universal, it is up to the viewer to look deeper and discover what those symbols meant to the people of that time period. A horn, for example, was a symbol of female power, not at devilish entity, and the symbol most commonly known as the Star of David wasn’t religious but a blending of male (upward triangle) and female (downward triangle).

This particular lecture, while slated for an hour and a half, went nearly two hours and left attendees wishing there was more time to delve deeper into the hidden (yet completely obvious once the viewer knows what to look for) symbols of art. Metcalf’s lecture style is user-friendly in that his presentation was jam-packed with useful information, comedic breaks and even some references to popular culture. He could have, if he had chosen to, spent the entire eight weeks on the topic of female symbols and the audience would have been enthralled from beginning to end. However, over the next seven weeks, Metcalf will tackle the following topics: Symbols of Kingship and the Sun, Symbols of Life Beyond, Symbols of Life’s Journey, Symbols of Politics and Power, Symbols of Love and Marriage, Symbols of Demons and Gods, and Symbols into the 20th and 21st Centuries.

The lectures take place every Thursday evening from 7 p.m. to 8:30 p.m. at the Triton Museum of Art at 1505 Warburton Avenue in Santa Clara. The lectures are presented at a drop-in fee of $20. Call 408-247-9240 for registration and additional information about the series. For information on the Triton and the museum’s current exhibits visit www.tritonmuseum.org.