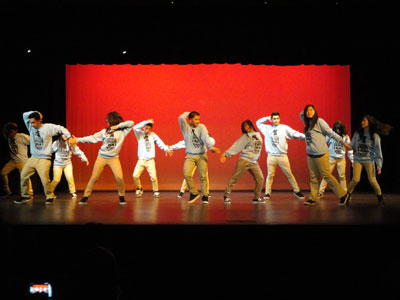 Inside the Community Recreation Center’s auditorium, thirteen acts competed in the third annual Santa Clara’s Got Talent show on January 21. And, in front of a sellout crowd of over 300, Intercontinental Ballistic Movements and Weapons of Music and Dance (IBMWMD) rose to the top of the talent pool.

“It was a surprise (to come in first) because we have no dance background,” said Wilcox senior Medalle of her team comprised of ninth through 12th graders. “But we worked so hard, so at the same time, it wasn’t a surprise.”

IBMWMD has placed in all three Santa Clara’s Got Talent shows, taking first in the inaugural competition, then known as Epicdemic, before finishing third, as Nameless, last year. Upon being introduced, their reputation preceded them as the crowd roared in excitement for what was to come.

“We were very nervous before going on stage,” said Medalle. “But when people cheer the way they did when our name was called, we got pumped up.”

With its first-place finish, IBMWMD was awarded a $500 prize, 10 times the amount the team received for its third-place finish a year ago ($50).

“With $500 we can do a lot (as a team),” Medalle said, pondering how the team would use its winnings. “It’s tradition for us to spend the money on bonding experiences, so we’ll all go out together and spend it.”

Friends off the stage, French Toast Mafia, with little choreography, had a chemistry that impressed the judges. “We’re pretty surprised we finished second,” said Maningo, “especially with only two days of practice.”

Mission College student Calvin Canchola, 20, a participant in all three shows, took the third prize of $125 with his original, untitled song. After taking second in the first competition, Canchola didn’t place last year.

“It’s exciting as hell to be awarded for a song I wrote,” said a humble Canchola whose song was a thank you to all his friends and family who have helped him through the years. “It means a lot.”

Canchola has been saving for a road trip to play his music at venues throughout the country. He plans to use his earnings to help with his travels.

Half of the proceeds raised for the event go to the winners, the other half goes toward the Youth Commission Scholarship Fund which is awarded this spring.

Best of the Best on Display at the Triton

Arts & Entertainment
Author Melissa McKenziePosted on April 10, 2013
Since the tragic events on September 11, 2001, many have shunned the entire Muslim community. Narrow-minded people taken that event and based their opinion...

Arts & Entertainment
Author Melissa McKenziePosted on March 30, 2011
Dome-shaped theaters can be found across the Bay Area and while most of these round wonders are abandoned, passersby are reminded of days when...
SPONSORED