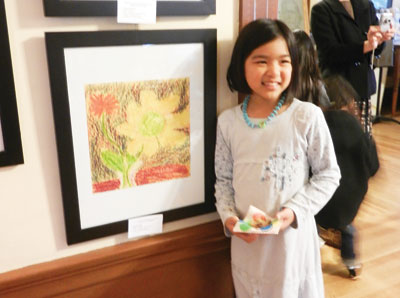 On January 22, just hours before the San Francisco 49ers’ season officially came to an end, the second grade students of Washington Open Elementary School and their families (many dressed in Niners gear) could be found enjoying the first ever Santa Clara Arts and Historical Consortium’s Children’s Art Exhibit at the historic Headen-Inman House in Santa Clara.

The second graders, taught by teacher Cindy MacKenzie and art instructor Norine Hendricks, smiled big next to framed images and talked about their drawings which were hanging on the walls to the left of the Headen-Inman’s entryway.

“[Jim Narveson, president of the Santa Clara Arts and Historical Consortium, has] been wanting to have this happen for a long time as many members of the consortium have,” said Debbie Pavao, vice president of the Santa Clara Sister Cities Youth Commission, as she addressed the students. “…While we were here and were meeting, we were sitting around thinking, ‘these walls – they’re nice – but they’re missing something’ and everybody said color. They need color and they need to have something exciting on them. So, Mr. Narveson said, ‘I think it should be children’s art. I think it should be young children’s art and I don’t think it should be judged by anybody but the students.’ So I decided to call your teacher, Noreen, and she said, ‘I think that’s fabulous and it’s actually something our students need to do.’ She told me that you had each made three different projects and you had to pick which one of those three that you would have hang here today.”

Pavao gave a brief history of the Headen-Inman House before Narveson spoke to the students. She also encouraged each of the students to return with their family and friends on Sunday afternoons between 1 p.m. and 4 p.m. when docents are available to give full home tours to anyone interested in learning more about Santa Clara’s history. 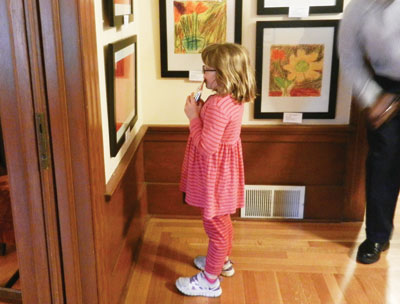 “This is kids art where no adult can judge you,” said Narveson. “That’s where the key is – that kids pick their art so no adult says that is good or that isn’t good so that was my motivation.”

The second graders and their guests were treated to juice boxes and cookies while their excited family members snapped photos of the art show.

The 30 works will be on display until May 13. The art consortium hopes to hold two art exhibits a year. For additional information about the Headen-Inman House and other historical homes in Santa Clara visit http://santaclaraca.gov/index.aspx?page=2086.