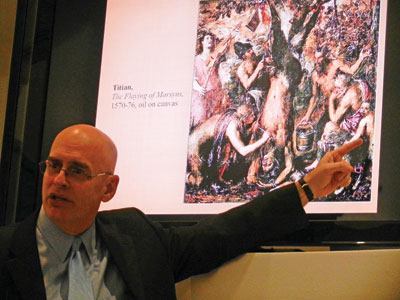 “We’ve been talking about the difference between elementary symbols, which are the most basic metaphors, the most universal metaphors and cultural symbols, or cultural ideas which is taking that metaphor and applying it to a specific time period or a specific geographical area to give it specific meaning,” said Preston Metcalf during the February 2 Hidden Symbols of Art lecture on the Symbols of Life’s Journey at the Triton Museum of Art.

“In the 19th century symbologoy was everywhere in art,” said Metcalf. “They just went nuts for symbols, especially somebody like [Adolphe-William] Bouguereau.”

In Bouguereau’s The Broken Pitcher, a young, barefoot girl sits at the edge of a well. Her doe-eyes look directly at the viewer. Her head is cocked ever so slightly to her left and her hands lay neatly clasped on her right knee. She wears clothing covering all but her forearms, ankles and feet, which are bare. Sitting next to the girl is a prominent jade and taupe pitcher with a crack at the bottom. But, what does it mean?

It would be easy to blurt out innocence – her wide-eyed innocent expression or her bare feet could be symbols for purity, but while those ideas aren’t wrong, there is more to Bougureau’s image.

The biggest symbol showing the young girl’s stage of life is the pitcher. “The vessel is broken. She’s now a woman,” said Metcalf. “That was a universal symbol. It’s been used all throughout art history…a broken vessel is a symbol for loss of maidenhood.”

“Now we’re getting back to the more elementary symbol because the vessel represents the chalice that we talked about in the first week – that which holds life’s blood. And that becomes the symbol for womanhood, the symbol for the womb in general and the womb of the Earth, which is also the cave. So you see, all of these things that we’re talking about are connected.”

“I want you to notice this – she’s barefoot. All of those girls that we saw are barefoot. Now this is one of the more whimsical symbols that comes into art that is in play in the 19th century,” continued Metcalf. “Girls in their innocence are often portrayed barefoot and then they’re wearing shoes as they become fully established women both physically and sociologically. And then they would kick off their shoes along with the rest of their clothes and become nymphs and mistresses and who knows what else so bare feet doesn’t always mean innocent. Sometimes it means just the opposite.”

Painting after painting Metcalf pointed out the symbols of life’s journey. From something as simple as entering into womanhood seen in Bougureau’s painting or something more profound as seen in Titian’s The Flaying of Marsyas.

The lecture continues tomorrow night at 7 p.m. with Symbols of Politics and Power. Drop in fee is $20. For more information visit www.tritonmuseum.org.