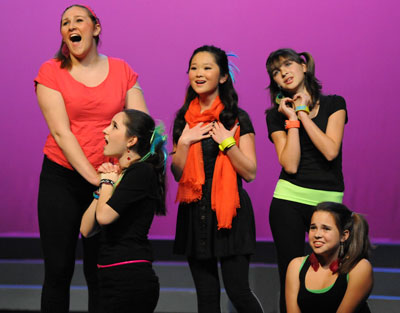 The Starting Arts Dream Team presented its Showcase 2012 January 26 and 27 at Santa Clara High School’s Performing Arts Center. The word “showcase” was very apt as it was a two-day chance to showcase the theatrical and musical talents of Dream Team. And the Dream Team seemed aptly named as well, since being part of it is something of a dream come true for nearly all of the actors. Composed of 43 professionally trained local youth from the Bay Area, the Dream Team danced, sang, acted and performed their way into the hearts of the audience.

Offered by invitation or audition only, the Dream Team is composed of actors who clearly love being on stage, being in the spotlight, and having a theater full of people watching, listening and being awed by their talents. Many members of the Dream Team have been with Starting Arts for a number of years and their experience shows. While their on-stage presence and abilities were notable in past years, it’s easy to see the tremendous effect of the Starting Arts program. When the age of the actors is taken into account (they’re in grades 8 – 12), the impact of Starting Arts is even more impressive.

Except it’s not. At least not to anyone who has attended a production by Starting Arts over the past several years. Shows with familiar names like West Side Story, Oliver, and The Wizard of Oz were all first-rate productions. 2011’s Dream Team production, Dream On, was simply astounding. But, that’s the point of Starting Arts. The group’s stated goal is “budding triple threats” who “receive top notch training in music, theater and dance.”

The show lasted for approximately 90 minutes and offered 31 different acts featuring the Dream Team in a series of songs, acting and dance numbers that proved Starting Arts is not only coming through on their end, but that the Dream Team is clearly learning and growing in its ability to command an audience.

The newest Starting Arts performing group, Dream Team II (DT II), shared the stage with the Dream Team. DT II is comprised of a select group of singers, dancers and actors who range in age from 9 to 13 years. DTII performed a number from its upcoming production, Starmites, which opens February 24.

Staring Arts will produce School House Rock February 16 and 17 at Farnham Elementary School in San Jose, and return to Santa Clara High School’s Performing Arts Center February 24 – 26 with Starmites. At the end of May, the Dream Team will present its production of Les Miserables. For more information on Starting Arts, visit www.startingarts.com or call 408-492-9022.