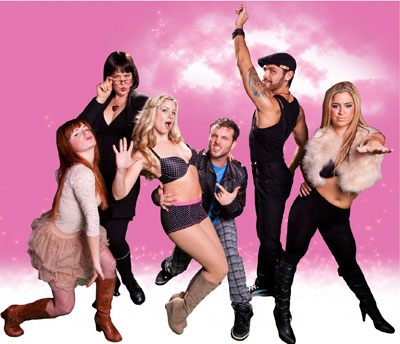 Oh Brit Brit. You were a child star on the Mickey Mouse Club, turned it into a successful music career, lived in the public eye, had a quickie Vegas wedding followed by an illogical marriage to a lazy oaf, tragically fell to the depths of despair, and rose to the top again, all while dealing with an over-bearing mother and the scrutiny of the media. Yours is the story movies are made of…or musicals.

And that’s just what Becoming Britney is – the rise, fall and reprise of Britney Spears’ career. The musical, now on stage at The Retro Dome, begins in the Promises, Promises (PR fixery and spirit spa) center and ends on the Broadway stage. It’s a tale of fear, sorrow, redemption and success all wrapped up into 90 minutes of pure entertainment.

Molly Bell shines as the scared starlet, forced into rehab after her infamous head-shaving incident. Through original and often hilarious songs, Becoming Britney is as much a musical about Brit’s life as it is a satire about musicals themselves (“music can save your soul as long as you stay committed to an unbridled and ridiculous art form”/”let the world of awkwardly placed dance numbers show you the way to your decision”).

Moments throughout mention costume changes, random character placement during scenes and even the fact that six songs have gone by before Britney tells the audience what she wants in life.

The cast, however, is simply incredible. Bell is a complete professional and a total package. She sings, dances and literally gives Britney the soul many Americans didn’t think she had.

Leanne Borghesi, the moderator and Brit’s mom, commands the audience’s attention with her voice. Lizzie O’Hara (Erato from Xanadu) is Woman 2, an easily excitable bulimic, among other characters like Lindsay Lohan and Danielle Mederios is Woman 1 (a cutter), Jamie Lynn Spears, and Paris Hilton. Both women were perfectly cast and wonderful to watch.

Best of all, Adam Theodore Barry, returns to TRD’s stage! Barry, who was last seen as Sonny Malone in Xanadu and praised not only for his acting abilities but his perfectly sculpted, jealousy-inducing legs, plays a myriad of characters and successfully pulls off each one; from Man 1, the pill-popping figment of Brit’s imagination in rehab to her Shake Weight-using manager who encourages Brit and K-Fed to do a reality-based television show (it’s not Chaotic, it’s Idiotic).

There is absolutely nothing to dislike about this show. Even non-musical, non-theater lovers will find themselves laughing out loud, clapping and singing along with the closing number, “Becoming Britney”. It truly is a must see.

Becoming Britney is on stage until March 11. It’s rated PG due to some adult language and sexual content. The show runs Fridays, Saturdays and Sundays. For tickets and additional information visit www.theretrodome.com.