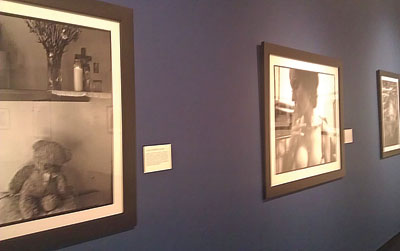 For nearly a month visitors to the DeSaisset on Santa Clara University’s campus have been enthralled by Rich Nahmias’ photodocumentary, Golden States of Grace: Prayers of the Disinherited. The display, which opened on January 13 and runs through March 18, shows images of various religious sub-sects throughout California.

“We often see depictions of conventional religious practices, yet we rarely encounter the alternative forms of spiritual expression adopted by marginalized communities,” says a statement on the DeSaisset’s website. “Golden States of Grace: Prayers of the Disinherited aims to give a voice to those who participate in the diverse religious landscape of California, but who have been pushed to the edges of society because of conditions, actions, or circumstances.”

Eleven groups participated in the exhibit meant to explore the scared worlds of the outcasts of society. The photos and accompanying descriptions represent groups like Transcendence, the world’s only transgender gospel choir, in San Francisco and Beit T’Shuvah in Culver City, the nation’s only halfway house aiding Jewish addicts. Also of interest may be Sex Workers devoted to Santisima Muerte in San Francisco, a community of Latina sex workers who embrace the Santisima Muerte (Holy Death), St. Jude and the Virgin of Guadalupe and the Women of Wisdom at California Institute for Women in Chino and Corona, a spiritual group for female inmates and non-inmates who have banded together to form an inter-faith, multicultural community.

“Whether they are recovering addicts or the elderly, immigrants or prostitutes, prison inmates or people battling AIDS – each of the eleven marginalized groups, which participated in this project, represent a different denomination, geography, and socio-economic/ethnic background,” says the official website for the exhibit. “Over the past three years, Nahmias has spent several days with each group, photographing and interviewing their participants, and recording oral histories with a specific focus on the individual congregants, their charismatic leaders, and their unique rituals and ceremonies.”

The outcome of Nahmias’ work is two rooms at the DeSaisset full of perfectly spaced, neatly aligned photos and descriptive plaques. With each step into the depth of the rooms, visitors experience a new individual, new story, and, in many cases, new insight or knowledge of a community hidden from mainstream eyes.

Nahmias proves identifying with one particular religion doesn’t necessarily mean one believes in a certain way of life. These non-traditional groups redefine the ideas behind typical beliefs and stereotypes placed upon believers. It is “merging art, humanities, and theology to bring together the personal and collective histories of these and other groups who, consciously or not, are reinventing time-honored modes of worship and ritual, and pushing their respective tradition into the 21st century.”

For more information on the exhibit visit www.goldenstatesofgrace.com/exhibit or www.scu.edu/desaisset/exhibitions/nahmias.cfm. The DeSaisset is at 500 El Camino Real in Santa Clara and open Tuesday through Sunday from 11 a.m. to 4 p.m. The museum is closed Mondays, holidays and between exhibits. Admission is free.

Arts & Entertainment
Author Melissa McKenziePosted on June 17, 2015
For years, artist Vanessa Callanta struggled to find her way. She always created, but never really had a direction, saying her style was “all...