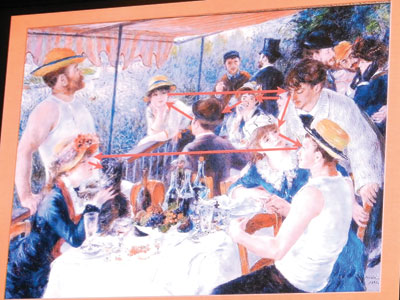 There are symbols for everything. Most people associate the heart with love and universally share it with those they care for. In this culture, we use a ring to symbolize marriage – a circle, with no beginning and no end worn on the left hand. But, in art, a heart or ring are not usually the symbols one needs to find in order to know if the painting is about love or marriage.

Triton Museum of Art Chief Curator Preston Metcalf explained many of the symbols used to portray these two ideas at the sixth lecture of the Triton’s Hidden Symbols of Art series.

Sandro Boticelli painted the much-celebrated Birth of Venus about love and sexuality. It’s the story of Venus – the real Venus. There are plenty of other paintings of Venus, but the secret is that Venus is not actually the subject.

“You gotta remember the church wouldn’t allow painters to paint dirty pictures of women so people could put them up in their homes; that was blasphemy,” said Metcalf. “You can’t paint naked women. But Venus is a goddess, you can paint her naked. That’s OK. So when you’re looking at Renaissance or Baroque art especially, and you see a goddess or you may see a muse, they can be naked. The church didn’t mind that. So the tradition was that the wealthy patron would have a mistresses; never his wife, because his wife would never do such a thing. She’s pure. She’s good. She’s the mother of his children. But the mistress? Sure you can put up the dirty picture of her. You just had to make sure it was Venus.”

“Titian would create [Venus of Urbino] and she is loaded with symbols as well. Here is the venus in the [classic Venus pudica pose] only now we have new symbols coming into play.” There’s a Laureal plant symbolizing constancy and purity – devotion to her lover. And a dog. “Fido,” said Metcalf. “Ever wonder where the name Fido comes from? Fidelity. Fido is fidelity and you see this little dog in all kinds of paintings of Venus, mistresses, goddess, and lovers. Only, notice that Fido, who is usually awake if it’s a married couple, is asleep. That’s because [Venus] is a mistress. The mistress doesn’t get to have Fido awake. Fiedlity is sleeping. That’s the message, that’s the symbol.” Only sometimes Fido is a cat. A cat, in these types of paintings, was most often used to symbolize a prostitute.

“Now this painting…This is by Pierre Auguste Renoir; The Luncheon of the Boating Party. It’s a beautiful painting…So Renoir has this beautiful painting and people love it but they don’t get that it’s also very sad. It tells a sad story of unrequited love. Look at all these people. They look happy, no? They’re having a great time at a boating party. This wonderful luncheon, but what’s really going on here?” said Metcalf.

The train of longing starts with a man whose head is peeking out from behind another man to the right of the center of the painting. In following his gaze, it is clear he is looking at a woman who is looking at another man, looking at another woman. The train continues until the final woman can be seen looking at “Fido.” “Everybody is looking at their love and none of them are looking at each other,” said Metcalf. “It’s a very sad painting about disassociation, about loneliness… Everybody looks happy, but nobody is connected. These are symbols of love too aren’t they? Symbols of unrequited love. Sometimes the symbol is not an object. Sometimes the symbol is the position of the people. Sometimes the symbol is the story that the painting or sculpture tells and we have to be in tune with it. Don’t be afraid to look at a painting and read it the way you would a book and say it may not be spelled out but what are they really doing? Follow the lines. You’ll be surprised at how many stories you can unravel.”

The series continues at the Triton Museum of Art on Thursday with Symbols of Demons and Gods. The Triton is at 1505 Warburton Avenue. Drop in fee is $20 per lecture. Call (408) 247-9350 for more information.

Making Sense of Demons and Gods

Arts & Entertainment
Author Diane AndrewsPosted on November 2, 2016
If real political farce has fatigued you, reserve a ticket to see the Santa Clara Players 2016 – 2017 season-opening comedy “Rumors” by the...

Arts & Entertainment
Author Carolyn SchukPosted on May 21, 2019May 24, 2019
Earlier this month the Chamber Players of the Peninsula Symphony Orchestra delighted local music lovers with another free concert at Santa Clara’s Triton Museum...

Arts & Entertainment
Author Melissa McKenziePosted on December 7, 2011
Since 1950, Charles M Schultz’s Peanuts comic strip has been charming readers. Along with merchandise, movies, television specials and even a themed area of...
SPONSORED