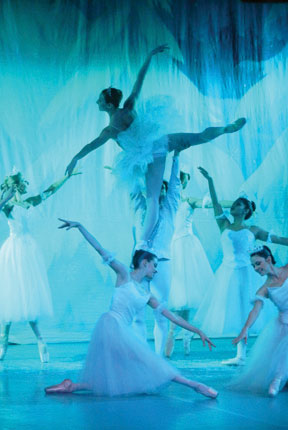 The performance is considered a masterpiece, the costumes are a sight to see, and even those who aren’t fans of dance will easily recognize the Peter Tchaikovsky score. The Nutcracker, a holiday treasure adored by many, was presented by the Santa Clara Ballet Company on December 10th and 11th at the Santa Clara Convention Center.

For 38 years, the Santa Clara Ballet has been performing the holiday classic, but this year was particularly special – three generations of the Reyes family were part of the production. Josefa Villanueva-Reyes, the company’s founder, once again, performed onstage as Frau Silberhaus. Villanueva-Reyes’ son, Andre Reyes, was set to play the Russian Trepak, and Reyes’ daughter, fifteen-year-old Rowan Allegra Reyes, became the youngest Sugarplum Fairy in the history of the Santa Clara Ballet. The trio has performed together in the past, however, due to an injury to Trevor Felixbrod, Andre Reyes filled in as the Cavalier. Watching father and daughter share their style, grace and love of dance on the same stage made the performance that much more beautiful.

While the first half of the first act of The Nutcracker moves slowly, with the performers participating in a Christmas party and receiving gifts, the ballet quickly picks up as soon as The Nutcracker Prince (Vinh Nguyen) comes alive. The Nutcracker Prince battles the evil Mouse King (Mercedes Hawkins) and takes Clara (Catherine Klicek/Megan Wong) to the Kingdom of Sweets where they encounter the Snow King and Queen (Kristin Lindsay and Charles Torres) before the act ends.

The ballet moves quickly in the dance-centered second act. The Nutcracker Prince and Clara meet the Sugarplum Fairy and Cavalier. Once the Sugarplum Fairy is told the story of how Clara helped the Nutcracker Prince defeat the Mouse King, the fairy declares that there will be a festival in their honor. Clara and the Nutcracker Prince then watch as all of the sweets in the kingdom perform for them – Spanish Chocolate, Arabian Coffee, Chinese Tea/China Dolls, Russian Cookies, and Ribbon Candies. Tthe most entertaining section of the entire ballet was Mother Gigone (Dennis Mullen) and her buffoons. A “woman” in a giant dress sidesteps out from backstage. She delights the audience with hand motions and facial expressions before tapping on her skirt. The buffoons roll out, two-by-two, and give acrobatic performances, which end when they return under Gigone’s dress. Year after year, this showcase of ballet, comedy and gymnastics consistently receives both laughs and multiple rounds of applause from the audience.

After the Sugarplum Fairy and Cavalier perform the Grand Pas de Deux, which is essentially a showpiece for the lead dancers in a ballet, it is time for Clara to leave the Kingdom of Sweets, and the sleigh angels come to take her back home.

“The gem of the whole thing is that this really is a mom and pop ballet company,” said Mullen, who not only played both Mother Gigonne but Drosselmeyer, and is the president of the Santa Clara Ballet’s board of directors. “It’s a civic ballet for Santa Clara. The leading roles are professionally trained dancers, but everybody has the opportunity to be part of the show…Our company is not meant to compete with San Francisco or San Jose. It’s a civic ballet. We have lots of children in the show…Mr. and Mrs. Reyes established a cultural jewel for the City of Santa Clara.”

For more information on the Santa Clara Ballet visit www.santaclaraballet.com