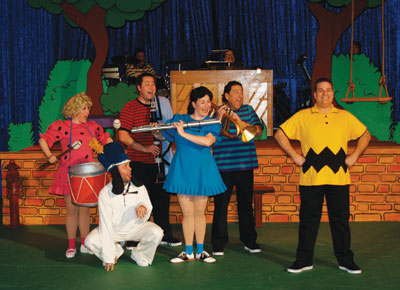 Since 1950, Charles M Schultz’s Peanuts comic strip has been charming readers. Along with merchandise, movies, television specials and even a themed area of a major amusement park, Charlie Brown and his pals have been teaching valuable lessons and offering comic relief for decades.

There is something increasingly magical about the Peanuts characters. Whether it’s the excitement children got when they grabbed the comics page and saw the lovable loser that is Charlie Brown’s latest predicament or the fact that the comics in circulation are the only comics left as Schultz passed away in 2000, the Peanuts gang holds a special place in the hearts of many children and adults alike. And now, until December 18, Snoopy and gang will be taking over the stage at The Retro Dome with the Tony Award winning musical, You’re A Good Man, Charlie Brown.

Some of The Retro Dome’s most loved actors like Stephen Guggenheim (Charlie Brown), Shannon Guggenheim (Sally Brown), Mark Martinez (Schroeder) and the always-incredible Hilary Little (Lucy Van Pelt) return for this Clark Gesner show. And, two newcomers take the Retro Dome’s stage – Nick Nakashima (Linus Van Pelt) and Keith Pinto (Snoopy). Both members of the Actors’ Equity Association, Pinto is particularly incredible in his role as Charlie Brown’s beloved dog. Pinto literally snatches away the spotlight each time he is on stage. Two highlights of note would be “Rabbit Chasing,” which he performs with Shannon Guggenheim and “Suppertime,” which Pinto sings along with the entire cast. Pinto literally leaves audiences wanting more and wishing every scene included everyone’s favorite Beagle. But fear not, Pinto will return to The Retro Dome stage this February when he tackles the role of Justin Timberlake/Kevin Federline in The Retro Dome’s next stage show, Becoming Britney.

You’re A Good Man Charlie Brown is the perfect way to introduce children to live theater. The show combines some of the most well-known cartoon characters with the family-friendly environment of San Jose’s coolest place to see a show (or film). The concession stand even helped get children and adults into the mood by serving hot cocoa as well as the standard sodas, candy and nachos.

Overall, the Retro Dome’s production has heart, a dose of nostalgia, humor, and incredible vocals, particularly from the enormous range of Little, the soothing voice of Pinto and the powerful Martinez. It is not to be missed!

The two-time award winning musical will only be at The Retro Dome until December 18. Shows are Fridays and Saturdays at 7:30 p.m. and Sundays at 3 p.m. and 7 p.m. The Retro Dome is at the Westgate Shopping Center – 1964 Saratoga Avenue in San Jose. Tickets can be purchased by visiting http://theretrodome.com/.