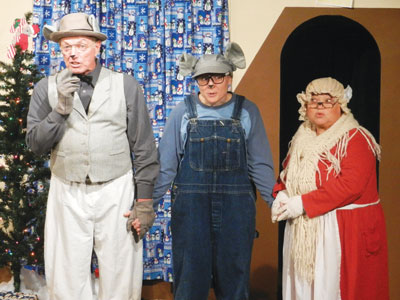 Once Upon A Time…The start of all fairy tales, and the opening to the Santa Clara Players’ holiday production of The Christmas Mouse which finished its two-week production on December 10th and 11th.

The children’s play features Mr. and Mrs. Robinson (Steve Corelis and Dee Baily) and the Mouse Family who share the Robinson’s home. Mrs. Robinson has placed second to Mrs. John in the annual gingerbread house contest for two years in a row, but this year she is determined to win so she creates the best house she’s ever made. However, Father Mouse (Ryk Houseman) pushes his son, Christmas (Sara Doeltz) to help the family find food for the winter. Christmas, not eager to please, but wanting to help, happens to wander into the Robinson’s kitchen where he finds Mrs. Robinson’s spectacular contest entry.

Unfortunately, instead of gathering food for the winter, Christmas, who seems to be lacking in the self-control department, demolishes the house, which leaves him with a horrible stomachache (and what mouse wouldn’t be achy after eating an entire house made of candies and cookies?).

After getting scolded by his parents, who male it clear they will no longer be welcome at the Robinson’s once Mrs. Robinson finds out what Christmas has done, Christmas decides to run away. But, before he goes off on his journey, he meets with the Storyteller (Sandi Wolfe). The Storyteller encourages Christmas to fix his mistake and with a little help from a friend, Christmas recreates the gingerbread home and Mrs. Robinson is none the wiser.

Of course, when it’s time for the competition, it is discovered that something curious has been added to the home – a little edible mouse. Eventually, Mrs. Robinson and Mrs. John go head-to-head in a gingerbread knowledge-off and Mrs. Robinson comes out as the victor, winning her first blue ribbon…And they all lived happily ever after.

The 45-minute production was based on the music of Linda Arnold and requires audience participation. The play will not begin until the magic fairy tale words are said and it does not end until the classic ending phrase is stated. Between the two sayings, the audience is encouraged to participate in three songs, most importantly The Magic Key.

The Magic Key illustrates the underlying theme of the play perfectly – we are exactly who we are, and despite not being perfect, we should like the person we’ve become. “I’m not perfect and I don’t pretend to be. I’m not perfect; I’m just me. Sometimes I make mistakes. Sometimes that’s what it takes to be the very best I can be. But I’m very special and you are special too. But I’m only me and you are only you.”

The Santa Clara Players will next produce Dial “M” for Murder, a mystery by Frederick Knott from February 24 through March 17, 2012. For additional information on the Players or to purchase tickets to upcoming productions visit, www.scplayers.org.