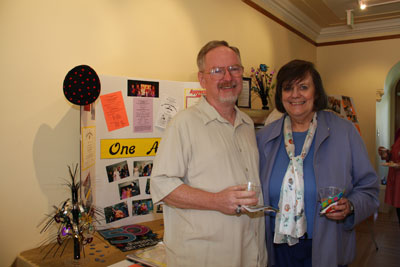 In 1962, an enterprising group of theater lovers, sponsored by the Santa Clara Parks and Recreation Department, put on a play in the Triton Art Museum. That show, “My Three Angels,” launched the company as an integral part of the local arts scene.

Six success-filled years later, renamed the Santa Clara Players, the company began staging plays in its current home, the intimate Triton Museum Hall Pavilion Theater. On Oct. 28, the troupe stood up to take a bow to celebrate its 50 years of community theater in Santa Clara.

Festivities at the Jamison-Brown house included an exhibit of memorabilia from the company’s five-decade history, as well as excerpts from company productions, read by the members of its board of directors.

The reading included a rare onstage appearance by longtime Players board member Jim Narveson as Elwood P. Dowd from “Harvey.” Narveson, who insists that his best role is off-stage, nonetheless delivered a witty performance that went a long way toward undoing the incalculable damage done to the reputation of Mary Chase’s classic by generations of high school drama clubs.

In recent years, the company’s productions have included Ernest Thompson’s “On Golden Pond,” an imaginative interpretation of Samuel Beckett’s “Waiting for Godot,” and Jean Battlo’s delightful – but unfortunately little-known – comedy of theatrical errors, “The Little Theater’s Production of Hamlet.”

“They’re very different from other theater companies,” says subscriber Bev Korby of Saratoga, who, with friend Penny Hall of Cupertino, has been coming to Santa Clara Players productions for about 10 years. “We’ve enjoyed every production.”

“Santa Clara Players is very attuned to the kind of plays our audience wants to see,” explains board member Pat Cross. “This is a theater company that’s very much a part of the community. We’re close to the audience and we can sense when they’re engaged and enjoying the show.”

As well as enhancing the area’s cultural life, the Santa Clara Players also contributes to the community in other ways – for example, through donations to the JW House at Kaiser Permanente Santa Clara Medical Center and the Mary Mason Memorial Lemonade Fund, which helps critically ill theater workers.

In December, the company will hold a community service fundraiser featuring its holiday show, “The Christmas Mouse,” at Chevy’s restaurant.

Viewing Quality Art Doesn't Have to Break the Bank