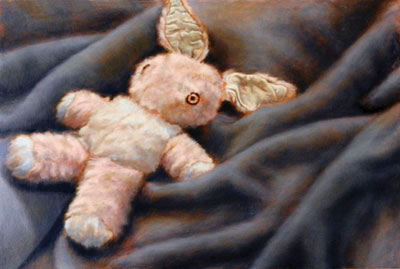 For the first time ever, the Triton Museum of Art has named two first place winners in the 2013 Statewide Painting Competition and Exhibition.

The exhibit, on display until Feb. 2, showcases the best of the best in painting throughout the state. There has always been a first, second and third place along with a handful of honorable mentions. However, this year the judges just couldn’t decide. And, instead of one grand prize of a solo show, there were two solo shows awarded.

Cuong Nguyen, who won the competition in 2011 with his large, incredibly realistic painting “Him,” took the top spot again. Nguyen’s winning oil painting, “Portrait of Paul as Leonardo,” uses his picture perfect painting precision and accentuates the light and shadows within the piece. As in other of Nguyen’s portraiture, the eyes are mesmerizing – drawing the viewer deeper and deeper into the canvas. 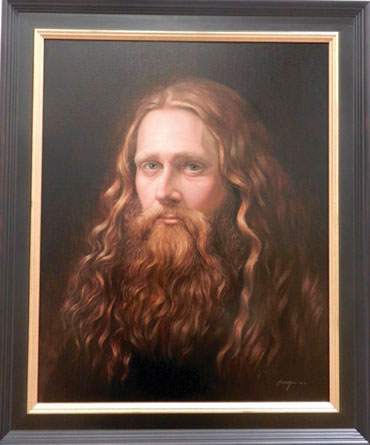 Christopher Olsen took second place with “Buddies: Guido and Ernest,” a multi-media on paper piece of two boys standing in water. The background is a bit abstract and the boys are also loosely defined. Their faces are seen, but many of the realistic details are lost (teeth, the whites of their eyes, one boy has fingernails and the other does not, etc.)

Third place went to Maura Carta’s “Rabbit,” an old, light pink stuffed animal (painted with soft edges to show the delicacy of the bunny to the viewer) placed onto a beautifully draped blanket.

One item in the exhibit, Jaya King’s “Familia Primero,” will hold a special place for many of the regular museum visitors. King’s gouache on watercolor paper painting depicts two young men, standing side-by-side. It only takes a second to recognize that the two men are Triton volunteer Myles Fenton and former volunteer Miha Sarani. (Sarani recently moved to attend art school at the University of Washington.)

Overall, the museum made solid choices, however, there will always be a few that viewers feel deserves more recognition or ones that a viewer may have not chosen for the awards or honorable mentions. Which are yours?

The Triton Museum of Art is at 1505 Warburton Ave. (across from City Hall). Visit www.tritionmuseum.org for more information.

Arts & Entertainment Community
Author Jacob BournePosted on September 5, 2018
Originally from Vijayawada in Southern India, Venu Devu came to the Bay Area to work as a data engineer. Experiencing the pressures of a...

Arts & Entertainment
Author Melissa McKenziePosted on August 22, 2012
Body modifications have long been part of various cultures. From simple modifications like tattoos and piercings to surgical procedures like dermal implants and tongue-splitting,...
SPONSORED