From the enormous to the eccentric, the San Jose State University Department of Art celebrates 100 years in its exhibit “Creativity, Change, Commitment” at the Triton Museum of Art.

Stephen Edwards’ “Betty’s Glasses,” a gargantuan pair of metal and glass cat-eye glasses is the first piece viewers see, as it sits outside of the museum. Inside, Ted Fullwood’s two untitled pieces made of wood, pipe cleaners, and plastic bags are bizarre and somewhat creepy fixtures near the back of the museum’s Permanent Collection Gallery. However, regardless of how each piece affects the viewer, they all tell the story of SJSU’s art department. 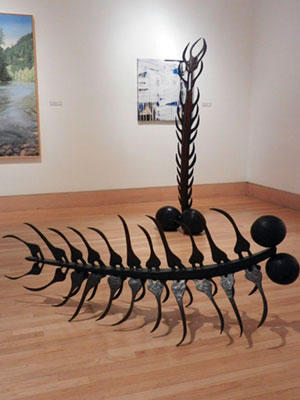 “As we have paused to consider one hundred years of the Department of Art at San Jose State University, the view to the past is astonishing,” reads the show’s accompanying plaque written by SJSU’s Jo Farb Hernandez. “It was inaugurated as a teachers’ or Normal school in 1857, and, in 1862, was absorbed by the State of California, becoming not only the first of the state’s teachers’ colleges, but California’s first state-supported institution of higher learning. In 1871 it was moved from its original San Francisco location for its predominantly young, female, and unmarried students. Classes in drawing were the earliest courses taught and, for a long time, these classes were required for every student, no matter their major or intended career. Classes in additional media and techniques were added quickly, as the administrators at that time understood that the study of the arts were essential in the development of a well-rounded, educated individual. Soon the San Jose Normal School evolved into the San Jose State Teacher’s College, then into San Jose State College, and finally into San Jose State University.”

The Triton exhibit contains everything from sculpture to gelatin prints. And, while some of the entries may make viewers scratch their heads and turn away, there are many less unusual and more traditional pieces that are part of the show, like Paul Pratchenko’s acrylic on canvas “Skipping Stones,” a simple, yet beautifully painted, nature scene, and Sydney Dunton’s “Cascade,” where walnut and walnut burl rectangle pieces are arranged in a sculpture cascade.

As part of the celebration, locations throughout the Bay Area showcased SJSU pieces throughout the latter months of 2013. This will continue through the early months of 2014, with the last of the shows running from February through March at San Jose City Hall. A hardcover book documenting the department’s past hundred years, including images by or narratives about over 160 alumni as well as faculty, staff and programs is available for purchase.

Arts & Entertainment
Author Melissa McKenziePosted on March 6, 2013
Does having an imaginary friend make someone certifiably insane? Is it enough to lock them up in a sanitarium so they can live out...

Arts & Entertainment
Author AdminPosted on June 8, 2011
One might say that theater has gone to Santa Claran JoAnne Bunker’s head. An 81-year-old mother of three and grandmother of seven, Bunker became...