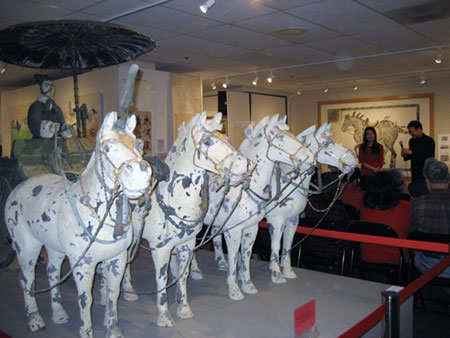 “Galloping: An Exhibition to Celebrate the Year of the Horse” runs through Feb. 16 at the Silicon Valley Asian Art Center in Santa Clara. The exhibit includes 30 original paintings, calligraphy, rubbings, and sculptures of horses.

“This is a rare opportunity for people to see so many famous Chinese works on horses,” says American Society for the Advancement of Chinese Arts secretary Karen Tseng, at the exhibit opening Jan. 26.

A replica of the half life-size No. 1 Bronze Chariot and Horses of the Emperor Qinshihuang (259 B.C. – 210 B.C.) dominates one exhibit room. Loaned by the People’s Government of Shanxi, China, where the original chariot (one of two found) was unearthed in some 3,000 pieces in 1980, this replica has travelled to Hong Kong, South Africa, the Middle East and now to Santa Clara. In 2013, a different replica of No. 1 Chariot was part of the Terracotta Warriors exhibition at the Asian Art Museum of San Francisco.

Original stone rubbings of two bas-relief horses from the Tang Dynasty cover an entire art center wall. The horses were carved on limestone panels placed on an altar outside the seventh century mausoleum of Emperor Taizong, who chose six of his favorite chargers to immortalize in stone.

These rubbings of the intact stone panels were made before 1914, after which the altar fell into ruin, and the panels were broken. Now restored, four of the original horse panels are in the Xi’an Beilin Museum, China. Two are in the Penn Museum at the University of Pennsylvania.

An original horse painting done in black ink on rice paper by Beihong Xu, one of the most famous horse painters in China, is on loan from a private family collection.

“Xu is famous for his powerful, powerful horses,” says Tseng. “To see this painting of his up close is such a rare chance.”

The Silicon Valley Asian Art Center (www.artshu.com; 408-248-2698) is an undiscovered gem for many outside the Silicon Valley Chinese community. Admission is free, and Jianhua Shu, curator, and Xinru Xu, assistant curator, are welcoming and available to share insights to enhance your visit. The center is on the fourth floor of Central Computer Building, 3777 Stevens Creek Blvd.

Watercolor Memories on Display at Triton