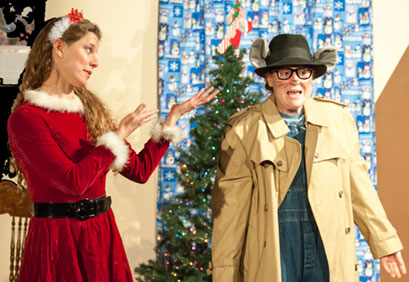 Most people generally aren’t happy to discover they have uninvited houseguests. But when that one house guest suddenly becomes a family of four, even people with exceptional equanimity will ruffle their feathers. And if that uninvited family is a Mouse family of four, most would react in an even less welcoming way.

But that’s not the case for the Mr. and Mrs. Robinson, who happily and willingly have shared their house with the Mouse family for years. Mother and Father Mouse and Mr. and Mrs. Robinson get along as well as almost any neighbors can hope to, and very little can get in the way of their long-standing friendship.

But when Chris (Christmas) Mouse looks for food to help the Mouse family get ready for winter and spies Mrs. Robinson’s prized entry for the Gingerbread House Contest, it looks like a dramatic crisis is brewing when he devours the entire confection. But, by ingeniously working with leftover crumbs, Chris is able to reconstruct Mrs. Robinson’s Gingerbread house in time for the contest.

Mouse is a delightful play that was written in 2009 by a former Santa Clara Players actor and now director, Michael Antonucci. This year marked the fourth consecutive year for the production. For the kids in the audience, and audience members with the kid in them, it’s definitely a play to see. It’s fast moving and the one-act format makes the time fly by.

Mouse had a short production run that closed on Sunday, December 15. But with any luck, it’ll have a return engagement next December. This year it opened on Friday, December 6, after the City of Santa Clara’s Holiday Tree Lighting Ceremony.

In December 2012, Santa Clara Players’ longtime actress Lindi Press was diagnosed with cancer and died three weeks later. Press played the role of Mother Mouse, and also appeared in the 2011 production, My Three Angels. Press was a great supporter of community theater and after her death the Players received a donation in her name. Several months later that was followed with a bequest from Press.

At the time, the Players were starting a scholarship fund, and decided to name it in her memory. The scholarship is for students graduating from Santa Clara or Wilcox High School who plan to major in Theater Arts in college.