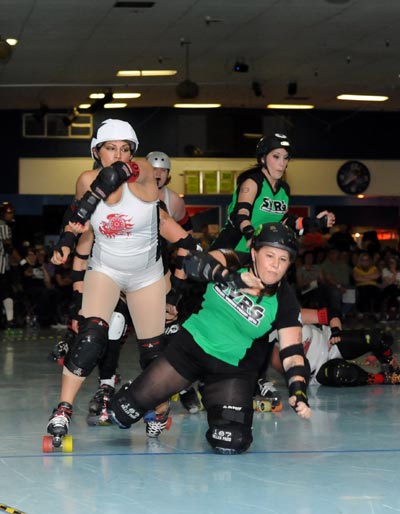 But sensationalism – sex-sationalism? – actually plays just a supporting role in the nearly century-old history of roller derby. Roller skating races go back to the invention of roller skates in the 19th century. Tradition dates the first use of the term “roller derby” to Chicago Tribune sports writer Joe Keris, who reportedly used it to describe roller skating marathons.

It was during the Great Depression that unemployed film publicist Leo Seltzer – variously described as a “failed film publicist” and “movie-theater mogul” – first recognized roller derby’s entertainment potential. In the Depression-era craze for endurance marathons, Seltzer’s 1935 Transcontinental Roller Derby exhibitions featured man-woman teams racing around a track nearly 12 hours a day for a month, covering roughly the distance of the continental U.S.

After noticing that the more collisions and pile-ups there were, the more audiences enjoyed the show, Seltzer re-engineered roller derby as a contact sport, featuring the blocking, slamming and jamming so beloved by B-movie producers. Distance goals were replaced by points scored whenever team members lapped their opposition.

But after promising growth on television in the 1950s and 1960s, by the end of the 1970s roller derby had lost its novelty and was largely reduced to World Wrestling Entertainment-like spectacle.

That is, until the A&E network broadcast “Rollergirls” in 2006, a reality show that followed an Austin, TX women’s roller derby league.

Since then, roller derby has grown steadily. There are over 1,000 roller derby teams around the world, most of them player-owned, and today’s game is a far cry from the exploitive spectacles of the past. Requiring simultaneous offense and defense, strategy is paramount in today’s roller derby.

But even without the hair-pulling, “clothes-lining,” and faked fights, there’s still plenty of action and plenty of camp – including campy derby nicknames such as Anna Mosity and Sandra Day O’Clobber.

One of the founders of Santa Clara Valley’s roller derby home teams, the Silicon Valley Roller Girls (SVRG) KillBytes and Dot Kamikazes, is a 27 year-old realtor who plays under the name Lindsay Lohanded. A South Bay native, Lohanded and a friend began skating with the east bay team, Bay Area Badgirls. “We wanted to do this, but we couldn’t commute to Alameda,” she explains. And so, in 2007 the SVRG was born.

This year is SVRG’s first competing nationally as a member of the Women’s Flat Track Derby Association (WFTDA), where it’s among the top ten contenders in the league’s western region. In its most recent home match, June 11, the SVRG KillaBytes rolled past Rohnert Park’s Resurrection Roller Girls, 135 to 69.

Former figure skater, Donna Diggler – and yes, the name is meant to remind you of the 70s movie, Boogie Nights – is a an occupational therapist in her day job. But three nights a week, the 30 year-old can be found at San Jose Skate on Blossom Hill Road, blocking and jamming her way around the track at terrifying speeds.

Diggler’s toned physique is testimony to roller derby’s physical demands – she reports losing 30 pounds after getting into roller derby. The training is rigorous. “A lot of squats,” she says. And it takes it physical toll. Most injuries occur at practice, according to Diggler, and concussions, broken noses and ankles, and knee injuries are all too common.

But it’s worth all the effort, she says. “It’s exhilarating. You feel really powerful. It’s so satisfying when you get that [opponent’s] jammer or you get your jammer [player who scores the points] through.”