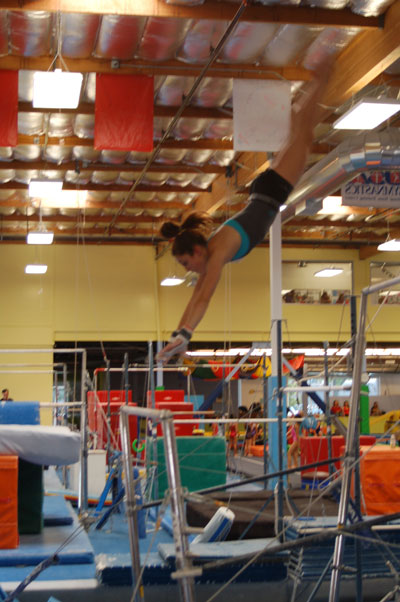 There are hundreds of gymnastics programs across the nation and each year, these programs compete to receive the honor of being named one of the top ten programs in America by MeetScoresOnline.com. As of July 17, Santa Clara’s Airborne Gymnastics is considered to have the second best women’s team program in the country and the best women’s program on the West Coast.

To determine the ranking, MSO takes the number of qualifying athletes from each team program and compares it to how the teams performed at qualifying meets. The list is then narrowed down to the top 10 gyms by looking at scores from regional meets and eastern/western results. Based on this year’s MSO rankings, Airborne’s women’s program placed second to Texas’s WOGA Gymnastics Academy, the training facility of Olympian Nastia Liukin.

“[This award] allows us to take a lot of pride in the coaches and staff we have here. It makes us realize we couldn’t have that [award] without the coaches we have here,” said owner Melanie Ruggiero.

Ruggerio and Leah Parker, Ruggerio’s sister and co-owner of Airborne, believe they have some of the best coaches around and are proud of their gym. “If you have an athlete that has natural ability and they want to be in a program [to foster that ability], they gravitate to our gym because of the success we have had in the past,” said Ruggerio.

In the past year, 50 of Airborne’s gymnasts have won a total of 85 individual, event and all-around titles in divisions 5-10. They also won the state team championship title in divisions 5, 6, 8 and 10.

While the upper divisions receive most of the glory, Airbrone is excited about many of the girls in its 6-8 year old division. Currently, there are four girls who have been handpicked out of Airborne’s 900 gymnasts for the Talent Opportunity Program. These girls are in the process of completing their regional testing. If they score high enough, they will qualify for national testing. The athletes who rank the highest will then go to the National TOP Training camp this December.

In addition to the excitement over Airborne’s TOPs gymnasts, six of the gym’s athletes have signed letters of intent to attend, on gymnastics scholarships, various colleges across the country. This fall, Taylor Madison will be attending Cornell University, Joyce Li has committed to Yale, Ellysse Sakai Hart will tumble at University of Denver and Anna Jawarski has signed a letter of intent for Southern Utah University.

Two additional gymnasts, both seniors this fall, have already signed letters of intent for 2012. Gina Costa will be at University of West Virginia and for the first time ever Airborne will be sending a gymnast, Melissa Chuang, to Stanford.

“[I chose West Virginia] because I love the east coast,” said Costa, a Los Altos High School student. “I have tons of family there. My dad is from there. I fell in love with the coaches and fit in well there.”

Chuang, a senior this fall at Monte Vista High School, had other reasons for accepting her scholarship. “I found out two weeks ago,” she said. “I was really excited when I got the letter and was jumping up and down for about 30 minutes. It was a lifelong dream come true.”

For more information about how the scores were tallied, visit www.meescoresonline.com and for additional information on Airborne Gymnastics, visit www.airborne-gymnastics.com.

Sports
Author Andrew BenschPosted on June 29, 2022June 29, 2022
Tuesday’s opening game of the 11U championship between Campbell and Santa Clara Westside Little Leagues is one the latter will want to quickly forget....

Sports
Author Andrew BenschPosted on June 26, 2022
The District 44 All Star tournaments are underway and the early signs are positive for Santa Clara Westside fans. It appears quite likely that...