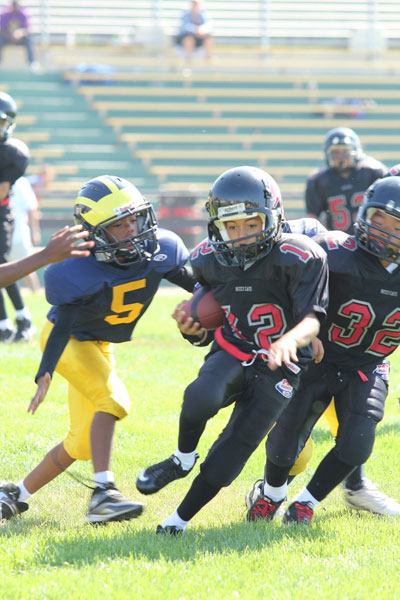 Who would have thought that the Lions (Midget Team) would start the season against Campbell and come out on the short end to open the season?

Looking young and looking to find themselves, these young men of the Lions learned a lot – within the first few plays it was clear that Coach Price had committed to an aerial attack, but the Lions came up short in this pre-season game. Final score: 8-16 Campbell.

The Panthers (Peewee) had the game of the day. Going into halftime down, Coach Emmit Palacios proved that he can adjust at-will and win the game. With 81 yards of rushing and 7.4 yards per carry, Anthony Contreras pounced on the Wolverine’s team. Nathan Kelly showed great leadership in reading the defense, taking advantage his rushing offense, but the 14-yard pass showed that Santa Clara’s Off Season Flag Football Program is paying off. Score: Panthers 24-16.

Sunday morning was a time of redemption for the Thunder Cats (Jr. Peewee). These young men ended the 2010 season short of their goals but with a desire to make this year their comeback. They did, winning their first game in dominating fashion.

The Little Dudes of Santa Clara – whether you call them Bobble Heads, Little cuties or something else, just call them the Mitey Cats! In the scrimmage earlier in the month the team was trying to find themselves and they did, behind three passes and over 80 yards as Paul Rosa took it to the Alameda Wolverines. Newcomer Mr. Arenas removed any doubt that the team had no speed. Jose Sanchez, a 9-year-old, showed that Santa Clara plays a physical game when he laid a hit on a Wolverine RB, causing a fumble. Score: Mitey Cats 18-0.