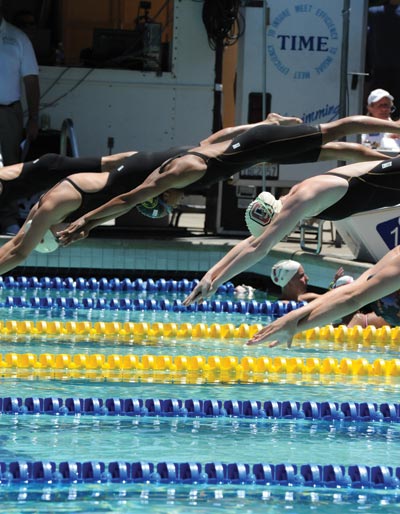 Records are meant to be broken and no matter how quick you are, there is always someone better, faster and stronger just waiting for their moment to shine. Such was the case at the 44th Annual Santa Clara International Swim Meet on June 16-19.

Santa Clara Swim Club’s Olympic hopeful Russell Payne made the B-final, or consolation bracket race, in the 200 and 400-meter individual medley. Payne finished fifth in his final of the 400-meter by swimming 4:32.42. The event winner, Trojan Swim Club’s Thiago Pereira swam the 400 IM in 4:15.89. In the 200-meter race, Payne finished seventh in his race by swimming it in 2:07.15. Pereira placed first in that event as well, swimming it nearly 10 seconds faster than Payne (1:57.63).

While SCSC didn’t finish particularly strong in many of their events, there was still much excitement to be seen by those in attendance. Meet records fell and there were many close races, but the most heart-stopping drama came in the men’s 200-meter butterfly. World record holder Michael Phelps faced Australian Nicolas D’Arcy in the event. Prior to this season, Phelps had not lost the race in nearly nine years, but on Sunday, he suffered his third-straight loss when D’Arcy came from behind and swam an incredible final 50-meters to touch the wall one-tenth of a second faster than Phelps.

“It was a pretty tough [race] to be honest. This morning the heats were pretty tough and the times weren’t especially fast so if you had asked me if I could swim those sort of times in the morning I’d probably tell you no and when we got to the 100, Phelps was a bit in front of me and I just tried to reel him in as best I could and it ended up being a good race,” said D’Arcy. “I think we’re both happy with it.”

The Santa Clara was the final leg of the Grand Prix Series. At the end of the meet, awards were given to swimmers who picked up the most points. Points were given based on performance with swimmers receiving five points for picking up a gold medal, three points for a silver and one point per bronze. The men’s high point award was given to Daytona Beach Speed’s Ryan Lochte, and the women’s award was presented to the Colorado Stars’ Missy Franklin. In addition, a third award was given to recognize the best swim of the meet. This year, the Earl Carmichael Performance of the Meet award was given to Australia’s Meagan Nay for her 200-meter backstroke race. Nay swam the event in 2:07.16, nearly two full seconds faster than the second place finisher, North Baltimore Aquatics’ Elizabeth Pelton (2:09.07).

Santa Clara Swim club is at 2625 Patricia Drive in Santa Clara. Additional information on SCSC can be found at www.santaclaraswimclub.org. For information on USA Swimming’s Grand Prix Series, visit www.usaswimming.org.