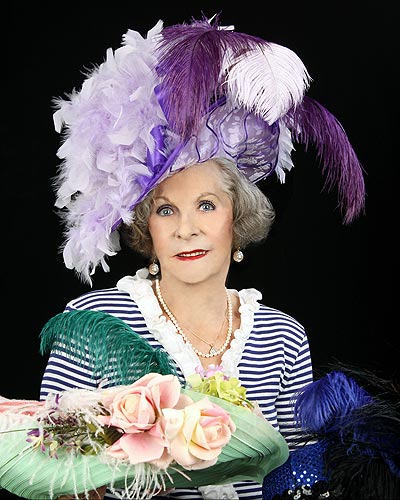 One might say that theater has gone to Santa Claran JoAnne Bunker’s head.

An 81-year-old mother of three and grandmother of seven, Bunker became interested in community theater in 1995.  She was taking a tap dancing class in Santa Clara when a friend suggested she try out for the dancing ensemble for an upcoming production of “Anything Goes,” which was being staged by what was then known as the Saratoga Drama Group (the group has since been renamed the South Bay Musical Theatre–SBMT).

She won a dancing slot in the production and was hooked on community theater.

It did not take her long to find another theater calling — the design and making of hats for the company’s productions. And so for 16 years she has been a volunteer with the SBMT.

She said her biggest challenges have been designing hats for elaborate productions of ‘My Fair Lady” and “Hello, Dolly!”

Bunker is currently the hat designer for SBMT’s upcoming production of  “Mack & Mabel,” the Tony-nominated musical by Jerry Herman based on the true Hollywood love story of silent film legends Mack Sennett and Mabel Normand.  The production will be presented May 14-June 4 at the Saratoga Civic Theatre, 13777 Fruitvale Ave. in Saratoga.

In addition to her hat duties for “Mack & Mabel,” Bunker is assistant to producer Lucy Haab of San Jose. “JoAnne,” says Haab, “is one of our most valuable volunteers.  She is willing to help in any way she can.”

Last year, Bunker, at 80 year old, was the oldest member of the dancing ensemble for “Hello, Dolly!”.

The spring and final show of SBMT’s 2010-11 season, “Mack & Mabel” is rarely performed, according to director C. Michael Traw of San Jose who has directed nearly 50 musicals for the local theater company. “The show,” he said, “features one of Herman’s best scores according to critics and is the composer’s favorite show.”

With music and lyrics by Herman and a book by Michael Stewart, the romantic story centers on legendary film director Sennett (originator of the Keystone Kops) and his adorable protégé, whom he transforms from waitress to silent film star. Their tumultuous and complex romance is set in the Hollywood of the 1920s, when daring on-screen antics, slapstick comedy and frolicking bathing beauties were delighting the movie-going public.

The score includes several memorable tunes, including “I Won’t Send Roses,” “Time Heals Everything” and “I Wanna Make the World Laugh.”

Heading the 30-member cast are veteran community theater actors Walter Mayes of Sunnyvale as Sennett and Mary Melnick of Cupertino as Normand. Both have been involved in theater for more than 25 years.

Besides community theater, she is a staunch fitness buff and has worked out at a gym twice a week for 15 years.