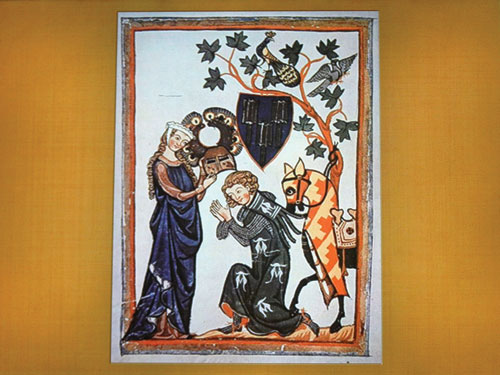 What do Ernest Hemingway’s “The Sun Also Rises,” and the movies “Forrest Gump” and “The Natural” have in common? They’re all the retelling of Wolfram von Eschenbach’s 13th century “Parzival” – the story of a pure-hearted person in search of his own “Holy Grail.” But, what’s the significance of the Parzival story? What can be learned from it and how did it influence art and society? That was the topic of the latest lecture at the Triton Museum of Art.

On Oct. 23, Chief Curator Preston Metcalf explained the significance of “Parzival.” “It changed everything,” said Metcalf. “It changed art. It changed literature. It changed our concept of love.”

“We’re talking about a time when Christianity ruled Europe and a Christian [Parzival] who had renounced God, and married outside of the sanctified rules of the church and who had all but abandoned the rules of his knightly system,” said Metcalf. “He abandoned all of those rules – everything that society told him he should be…[He] has left the system behind and he is living within his own nature. He experiences what we call the birth of compassion…Parzival went through the process of leaving the systems behind, going through them, using them, but leaving them behind and having a birth of compassion. This is the true nature. He sees no boundaries. Kingdoms mean nothing to him anymore. There are no religious differences…That’s the beauty of the story. And that’s it. It’s a story of leaving behind and embracing the nature.”

The art before “Parzival” had become flat – a representation of the spirit. But, after “Parzival,” art became about Venus, the goddess of love. Only Venus was Christianized and the Cult of Mary emerged. “The goddess has come roaring back in a big way because now we need a figure that represents nature,” said Metcalf. “Venus always represented nature and now Mary represents this pure love.”

The Triton’s art and literature series continues on Thursday, Nov. 7 with “James Joyce’s ‘Ulysses’ and Picasso’s View of Everything.” Lectures begin at 7 p.m. Drop in fee is $20. Visit http://tritonmuseum.org/education_adults_arthistory.php for more information.