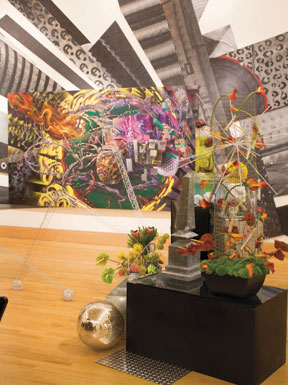 Inspired by works of art from the Triton’s current shows or permanent collection, the florists reinterpreted the pieces into breathtaking and meaningful floral designs.

“About a year and a half ago I started making aquariums…I wanted to make them for vanishing species, people who weren’t around anymore…I saw the [Hupa Basketry Hat] and I said, ‘oh I want to do the hat,'” said artist and Mission College Retail Floristry instructor Sandy Lesnewsky, who used California-grown flowers in her piece. Lesnewsky began working on the piece, but was delayed in completing it until last week. “My mother passed away…and I was able to work on the piece again. So I think it is basically for my mom…It started off as kind of for species and people who have vanished from the Earth and…ended up being a tribute to my mom.”

While Lesnewsky encompassed the actual work of art into her design, most florists pulled a color scheme or idea from their chosen artwork and created an accompanying arrangement. The show-stopper, however, was created by Kren Rasmussen of Bloomster’s. Rasmussen interpreted of the largest piece of art within the museum – Patrick “Wadl” Hofmeister’s attention-grabbing “Seeker” – by constructing an arrangement for each of the paintings within the piece and connecting them through wiring.

“My favorite interpretation has got to be Kren Rasmussen of Bloomster’s,” said Chief Curator Preston Metcalf. “Isn’t that amazing?…That’s the piece.”

In the past, the Fall Floral Festival consisted of the opening evening on Friday and viewing on Saturday and Sunday, but this year the museum tried something new.

After dining on hors d’oeuvres while enjoying the floral interpretations and listening to a performance by the Peninsula Women’s Choir on Friday night, guests were invited back for the weekend festivities. On Saturday, Metcalf lectured on the history of flowers in art and florists gave design demonstrations. And, on Sunday, those who were looking for a lower key event, could walk through the Triton galleries and admire the pieces.

“It’s a great fundraiser because we don’t spend a lot of money on it,” said interim Executive Director Jill Meyers. “This is a fundraiser where we have very few expenses so it allows most of the money from the fundraiser to go into the programming because we get so much donated in-kind.”

Haute Cuisine and Catering, Catered Too!, The Party Helpers, Black Tie Desserts and Fine Catering, Joseph George Fine Wines, and Parsley, Sage, Rosemary and Thyme donated the food and beverages, and each of the 10 floral paintings that were up for auction were donated by the artists.