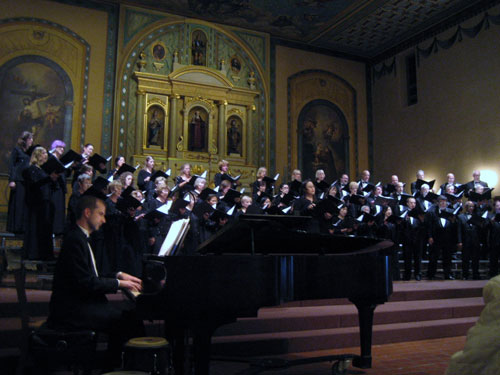 “The concert far surpassed what I expected. It was surprisingly lively and vibrant,” says Dale Bracey of Los Gatos, attending a Santa Clara Chorale concert for the first time at the invitation of Chorale alto Beth Robb.

The audience was hooked from the start as the Heavenly Voices Choir of third through tenth graders led off with “The Lord is our Light,” a peppy Zulu traditional song accompanied by piano and bongo. They finished with “Grace of God,” simultaneously signed and sung in Korean.

The Miller Middle School Advanced Choir equally delighted the audience, opening their performance with “A Pentatonic Alleluia.” The singers encircled the sanctuary, and their five-scale alleluia was a haunting crescendo filling the church as voice after voice was added until all were singing. They ended with a lively selection from “Kenyan Welcome Songs.”

“These young singers are all performing well beyond their age,” says Hanna-Weir. “Their dedication to this craft is unparalleled.” He gave equal praise to the Santa Clara Chorale he is directing in concert for the first time.

“The Chorale gave me a warm welcome, and I’m impressed by their enthusiasm and willingness to try anything I ask them to do,” says Hanna-Weir. “We have really incredible singers, high-level musicians.”

And Hanna-Weir asked them to do a lot musically and linguistically, saying that he juxtaposed “pieces from different times and traditions to discover the common musical connections across the centuries.”

The Chorale program opened with motets in English and Latin, followed by quartets in German by Haydn and Brahms. The Chorale next sang songs in Latin, English, and French—Fauré’s “Cantique de Jean Racine”—and ended with the American spirituals “Ezekiel Saw duh Wheel” and “Elijah Rock.”

The concert’s grand finale blended the voices of all three choirs. About 150 performers—almost overflowing the chancel—sang “Ritmo” by Dan Davison. It was an energetic Latin-style piece with Spanish lyrics, piano duet accompaniment, and plenty of handclapping.

“Awesome! It was a delightful evening,” says Bracey, standing with the crowd for a final ovation.