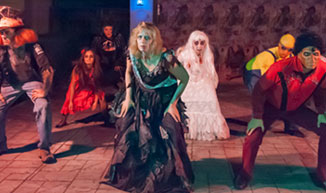 A Halloween Haunted House that began approximately 10 years ago, continued as a Santa Clara tradition again this past Halloween at 2343 Warburton Ave. This year, the line of people waiting to go through the winding hallways full of spooks, scares and fights stretched down the street. This year included a flash mob performing Michael Jackson’s hit song, Thriller. The new twist was that donations were accepted to benefit the American Cancer Society’s Relay for Life.

The Knight of Our Life: Parzival's Influence on Art and Culture

Arts & Entertainment
Author Larry SacksPosted on April 25, 2018
While it’s always fun and enjoyable to listen to live music under the stars at the Pavilion in Central Park, when the weather isn’t...

Arts & Entertainment
Author Cynthia ChengPosted on December 11, 2020
On Dec. 5, Sunnyvale Community Players premiered its newest musical with a virtual streaming of “Once On This Island,” a show running until Dec....

Arts & Entertainment
Author Carolyn SchukPosted on May 21, 2019May 24, 2019
Earlier this month the Chamber Players of the Peninsula Symphony Orchestra delighted local music lovers with another free concert at Santa Clara’s Triton Museum...
SPONSORED