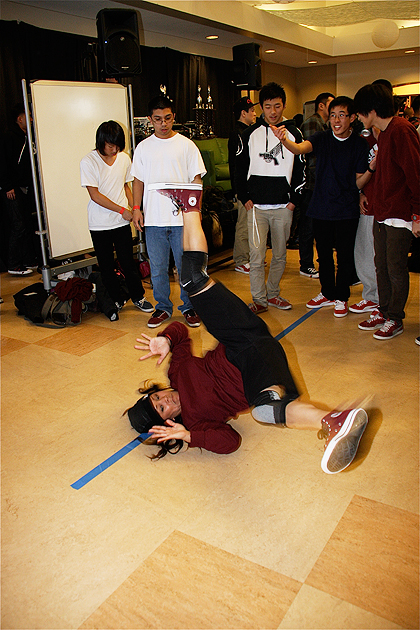 Teens gather at the Teen Center from all over, and come by bus if they can’t drive, for events like the Cyber Cup on February 26. A huge circle of on-lookers surrounds contestants who are performing amazing dance moves, spinning on the floor and standing on their heads. The break dance competition begins.

“I signed up on Facebook ahead of time,” says Kelsey, as she practices her moves on the sidelines.

This year 84 dancers signed up, according to Richard Casem, Santa Clara’s Recreation Coordinator. “This is like a tournament for middle school kids and high school kids. We do this once a year. It is a way for the kids to come out and watch and dance and express themselves in a positive way. They are very respectful of each other,” says Casem. “It’s like going to Cirque Du Soleil. The kids are powerful and work hard,” he adds. At that moment, the crowd applauds as a “breaker” arches and spins on one hand on the floor. It is obvious that flexibility, stamina, strength and inclusiveness all play a role in this event.

There are two types of competition in the Cyber Cup. Two on two involves crews of two who compete against each other within the circle. In the “Shark Tank” one dancer dances in the circle until he “calls out” someone to “battle” him or her to outdo him. Judges are people who have credibility in this hip hop community due to rising through the ranks by winning competitions for their own expertise. “Sometimes judges get paid and it is an honor,” comments Waigi Collins, member of the A-1 Crew of breakers (www.myspace.com/A1Breakers).

Brian, an eighth grader, practices every week. “I started because of a show on MTV. I get a good vibe. It is a huge way to stay away from drugs and alcohol,” he proudly shares. Break dancing is a great way to exercise and to obtain a feeling of wellbeing.

“Smoking kills a B-Boy’s skills,” adds Kenny from Santa Clara High School. B-Boys and B-Girls are the accepted terms for those who participate in the art form.

“It is more than just throwing yourself around. There are different moves you must learn. You gain so much confidence doing things you didn’t know you could do,” says Waigi Collins, a teacher of break dancing for those ten-years-old and up starting March 23 at the Youth Activity Center in Santa Clara. (See the Winter/Spring Recreation Activities Guide).

The Santa Clara Teen Center does a good job of hosting the Cyber Cup, which travels nationally to different locations and is well organized. For a mere $7, those enjoying the event could stay as long as six hours. There are vendor tables with T-shirts and refreshments sold by local school clubs.

“This is a way to tap into the teen culture and give them a chance to showcase their skills,” concludes Casem.

Two Reasons to Walk in the Park