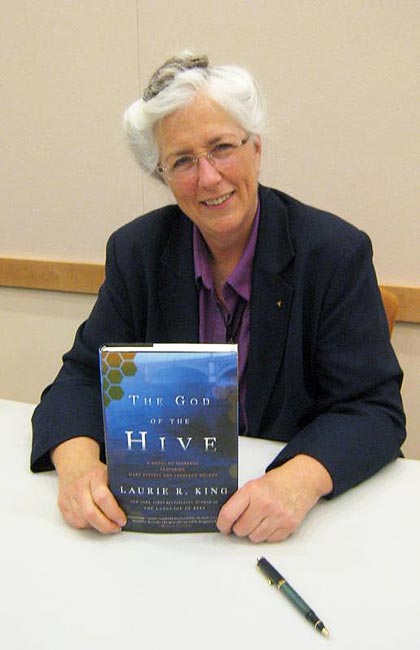 Lively laughter filled the packed Cedar Room at Santa Clara’s Central Park Library on Feb. 15. The audience was not responding to the one-liners of a stand-up comedian, but to mystery writer Laurie R. King’s enlightening musings about her life as a writer and the ideas behind her work.

“The God of the Hive,” King’s newest book, is a mystery adventure set in early 20th century London. The book is part of one of her popular mystery series featuring sleuth protagonists Mary Russell and her husband, the famous Sherlock Holmes. Because Sherlock Holmes was initially a creation of Sir Arthur Conan Doyle, King has experienced some backlash on the Internet for reintroducing this character in her work.

“In the early days, I was flamed whenever a new Mary Russell and Sherlock Holmes book came out,” King says. “The [Sherlock Holmes] purists were not amused by this. But after a few of my books came out, it became clear that I had respect for Sir Arthur Conan Doyle and his writing. When people knew I wasn’t going to veer into Sherlock erotica, they began to relax.”

At a book fair, a man waiting in line to have his book signed asked King about her decision to create such a wide age gap between the young Mary Russell and older Sherlock Holmes.

“I told him that I married someone 30 years older than I am, so I know what a 60 year-old man is capable of,” King says. “The man [who asked me the question] turned beet red, got his book, and left.”

King’s Mary Russell and Sherlock Holmes mysteries can also be regarded as historical fiction. King feels that writing about history from a fictional perspective shows readers how the past can mirror the present.

King holds a Bachelor of Arts in comparative religion from University of California at Santa Cruz and a Master of Arts in Old Testament Theology from the Graduate Theological Union in Berkeley. Applying her knowledge of theology in her writing, King sees to it that her character, Mary Russell, is well-versed in the Jewish Bible, also known as the Old Testament. An undergraduate academic thesis King wrote on the archetype of the fool in Western culture proved useful when she wrote “To Play the Fool,” a mystery for a different series featuring a San Francisco-based detective named Kate Martinelli. In this story, the detective meets a homeless and spiritual fool.

While King subtly incorporates knowledge about theology into her work, she insists that entertaining readers is her main job.

“My job isn’t to write ‘capital L literature.’ I want this to be fun. Besides, there’s a wealth of subversion you can sneak [into writing],” King says as audience members break into chuckles.