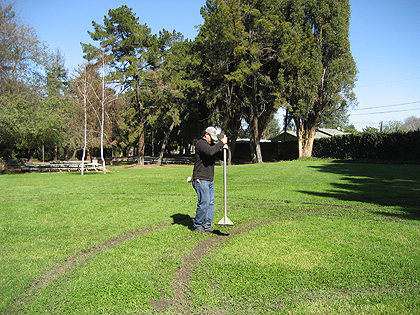 Vandals painted graffiti on picnic tables and did donuts in their car, damaging the grass, Presidents’ Day weekend at the six-acre Homeridge Park, 2985 Stevenson Street, near Homestead and Woodhams. Two other parks were also tagged with graffiti.

The vandalism was reported by a park worker February 21, and the next day, Evan Rosa, a City Parks Department grounds maintenance worker, was already on the job fixing the damage. He spent two hours at Homeridge Park painting over the graffiti and tamping the muddy car tracks to bring the grass back up.

“We deal with graffiti on a daily basis. Sometimes small, sometimes huge. We have books on pictures of vandalism. I send all pictures to the police department,” says parks supervisor Jay Selig. Photos help tie the graffiti to individuals or gangs.

“We budget $15,000 annually for vandalism, which barely covers the cost of all the graffiti remover,” Selig says.

“The faster we can clean up graffiti or correct vandalism, the less likely it is to occur,” says Santa Clara Police Sergeant Raymond Carreira, explaining the city’s “broken window theory” of crime prevention. This 1982 theory states that if damage is repaired quickly, it shows community concern and discourages further crime. Otherwise, one broken window leads to another.

“It’s very important that our citizens do report crime as soon as possible,” says Carreira.

Anyone observing vandalism should call 9-1-1 if it is in progress. Otherwise, call Dial-A-Tip Anonymous and the Graffiti Hotline, 241-9495; the police desk officer, 615-4700; or make an online report: http://scpd.org.

Carreira says that vandalism in Santa Clara is sporadic. “This is partly a result of the cooperation between city employees and the police department in cleaning up graffiti and vandalism so quickly,” he says.

Rosa says that about a year and a half ago in Homeridge Park, someone had repeatedly done donuts in a pick-up truck. That person was finally caught when the truck tracks were followed to his home nearby. The penalty for vandalism varies depending on circumstances but at the least would include restitution.

“Funny. The same parks I used to enjoy myself when I was a kid, are now my responsibility,” says Rosa, a life-long Santa Claran, doing his part to keep up the city’s 39 parks.

Community
Author Adam PhanPosted on July 18, 2018
Lego enthusiasts and builders assembled at the Bricks by the Bay convention at the Santa Clara Convention Center from July 12-15. Run entirely by...