A 13-year-old girl is fighting for her life after a man drove his car into a group of people in Sunnyvale. The Department of Public Safety (DPS) says 34-year-old Isaiah Joel Peoples of Sunnyvale hit the group of people around 6:40 p.m. Tuesday night.

“As he approached Sunnyvale Avenue [on El Camino Real], he veered into the crosswalk,” said Captain Jim Choi of Sunnyvale DPS. “There’s evidence on scene that there was no attempt to brake or stop the vehicle. There are no skidmarks. People stated that they heard the vehicle accelerate. There was no movement of the vehicle from the driver trying to avoid pedestrians. He continued in a straight path hitting seven of the eight pedestrians; continued until he struck a tree at a high speed.”

The 13-year-old is from Sunnyvale. She suffered the most major injuries of all the victims and is in critical condition at a local hospital.

“Her current condition, as far as improving and all that, it is unknown,” said Captain Choi. “We do ask the community members to keep her in your thoughts and prayers.” 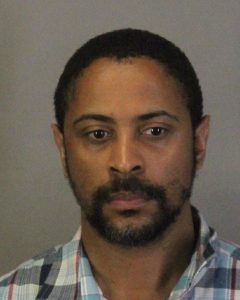 Two of the eight people injured were from Santa Clara; the other six were from Sunnyvale.

Investigators say three victims, all adults, are still in the hospital. They all suffered major injuries but are considered stable. Another adult man was treated at the hospital and has been released.

Three people were treated at the scene for minor injuries, including a 15-year-old boy and a 9-year-old boy. Investigators are still trying to determine if the injuries to the 9-year-old were the result of the collision or something else.

“It looks like his father was able to move him out of the way but because of his proximity to this incident, he is being listed as a victim of attempted murder,” said Captain Choi.

Investigators executed a search warrant at Peoples’ apartment on Wednesday morning. Captain Choi says it will take time to go through the evidence, but at this time there is no indication that this was an act of terrorism or that Peoples was connected to a terrorist organization.

Peoples was booked into Santa Clara County Jail on Wednesday on eight counts of attempted murder. Captain Choi says Peoples stayed at the scene as if he was waiting to be arrested. He was coherent and able to answer questions.

Peoples indicated to investigators that what he did was intentional.

“He did not express any remorse as far as we can tell…he was even keel, but no statements of remorse,” said Captain Choi “He did not say why he did it. That’s still under investigation. He is being cooperative…We’re trying to validate everything that he said to rule out any acts of terrorism.”

Some news agencies have talked to family members who say Peoples was suffering from mental illness or Post-Traumatic Stress Disorder (PTSD). Captain Choi says investigators are looking into that angle. They have also taken a blood sample to determine if drugs or another substance could have played a part.

The FBI is helping with the investigation.

Two lanes of El Camino Real were closed overnight as investigators gathered evidence and cleaned up. Those lanes were reopened early Wednesday morning.

Driver Arrested After Driving into Crowd in Sunnyvale

Investigators: Peoples was Army Veteran and Department of Defense Contractor

Public Safety
Author Erika TownePosted on December 8, 2022
Sunnyvale Public Safety Officers have arrested Jesse Fausto Correa, 29 for the commission of a hate crime, along with robbery, battery and elderly abuse....