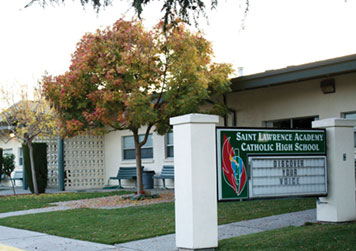 There have been some big changes at Santa Clara’s St. Lawrence Academy. The school’s governance model has changed, and with that, new programs and attitudes have been introduced to the small, Catholic high school.

“It’s no longer a parish high school even though it’s on the parish grounds,” said first-year President Phil Dolan. “It’s now like Mitty and governed by the diocese.”

In addition to switching the governing body from the parish to the diocese, the school has worked to combat dwindling enrollment by giving the school a facelift, changing its tagline to “discover your voice,” and celebrating its size.

“Kids can participate in any sport,” said Dolan. “They don’t have to tryout to participate. If they don’t make the first team, for example, they’re not cut. They’re still part of the team and they may just get their skills developed before they start playing. But, if you’ve never played volley[ball] before and you’re a sophomore or junior and you want to play – you can play. That doesn’t happen at some of the larger schools…It’s the same with the clubs – the co-curriculars.”

St. Lawrence offers a variety of interest clubs, from chess to robotics. It also appears as if the everybody-can-play mentality of the school has brought its sports teams considerable success. From the school’s cross country to baseball teams, St. Lawrence students have excelled on and off the playing field.

To help in the classrooms, St. Lawrence has brought in a learning specialist to work on individualized programs for the school’s special needs students. And, to keep up with the ever-changing technological climate of Silicon Valley, St. Lawrence has teamed up with NVIDIA to improve its tech-media center.

Eventually the school hopes to provide coding and gaming programs. “Probably within three years,” said Dolan, “we’ll have a full, progressive program starting with computer science and going all the way through gaming. That’s the goal with NVIDIA – to have them help us get to that level and stick with us and work with us…We’re not about cookie-cutter students here – we can’t be. We have to meet the needs of the kids and let them excel in the areas that they like. Or, if they didn’t know that they were good at something, give them a chance to try it to find out if they are good at it and then showcase them.”

Although St. Lawrence has often been called a “well-kept secret,” or “hidden gem” because of its location in a residential area right off Lawrence Expressway, Dolan wants the community to know that as the school grows, students will continue to be its first priority.

“We invest in every kid here because it’s a small size. Nobody gets lost. They’re not just a number or a face. They actually know people and people know them.”