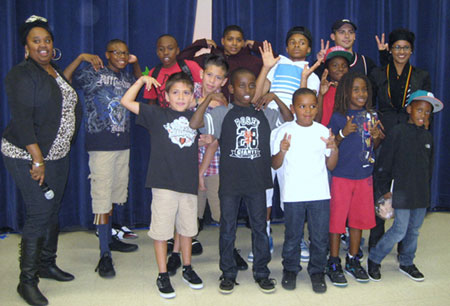 “When I say, ‘Swag’n not sag’n,’ you say, ‘Pull your pants up!'” Traci Saleh tells the audience at the Swag’n Not Sag’n Fashion Show November 16 at Kathryn Hughes Elementary School, 4949 Calle de Escuela, in Santa Clara.

“It has been placed upon my heart by God to do something positive for the [young] males and the community in an educational, creative, fun way, so I came up with the slogan ‘Swag’n Not Sag’n’ and decided to put on a youth male fashion show,” says Saleh, a Santa Clara mother of two sons-turned-models, Abbas, 12, and Maulidi, 7.

“Lots of us think things when we see sag’n pants, but we don’t say them,” she says.

Sagging pants are the ones worn so low that boxer shorts—and sometimes a bit of backside—show.

“Swag’n means to carry yourself with class,” says Quita Bender, Saleh’s sister. “We want kids to know there’s no class in wearing your pants beneath the butt.”

“You can still have swag without the sag,” says Christal Carthon, whose son Johnathan, 11, was one of the 15 models from Hughes and a few other Santa Clara schools. “A lot of young men get labeled gang-affiliated because of how they dress.” 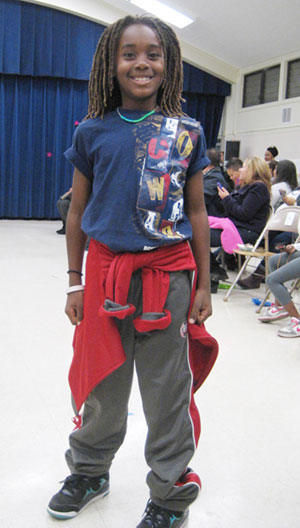 Former gang member Elisha Qadir Jones, Saleh’s cousin, laid it on the line for the models and estimated audience of 45.

“What you see ain’t all cool. I lost a good friend from sag’n. He wasn’t a gang member, but he was profiled because he dressed like that. I want to prevent you from going that route,” says Jones, who drove up from Southern California to share his story.

“I had to learn [not to sag] the hard way. I’ve been qualified for many good jobs I didn’t get because of that,” says Jones.

“Teens need to know how to dress properly. If you see a teen with sagging pants, we judge them negatively. I hope this [show] encourages them to be a positive role model for their friends,” says Mario Bassar, whose stepson Jamal, 15, was a model.

“This is teaching the kids to be positive about fashion. Girls don’t have to dress provocatively to be beautiful,” says Rasheka Bernard, whose daughter Rakayla, 6, also modeled.

The casual and dress casual clothes modeled were provided by Old Navy, The Gap, A’Gaci, and Hollywood Accessories at the Great Mall in Milpitas. Jersey Mike’s Subs at Santa Clara’s Rivermark Plaza and Fresh & Easy in San Jose donated sandwiches and drinks for the models. Other local businesses donated raffle prizes.

“Everybody got swag inside of them. You don’t have to sag to have swag. Your coolness is within you,” says Jones, demonstrating considerable swag of his own in a well-fitted gray suit, black shirt, and gray and black tie.

Inmates in American prisons were the first to wear sagging pants because they weren’t allowed to wear belts. Then sagging caught on beyond prison walls, popularized in the 1990s by hip-hop artists. Indecency laws were passed against the controversial fashion trend, and, going full circle, individuals have been sent to prison for wearing seriously sagging pants.

“Pull your pants up!” shouts the audience in chorus. Contact Saleh at swagnnotsagn.yolasite.com.