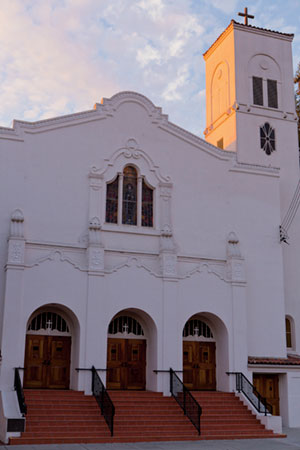 Few know that Santa Clara’s St. Clare School in one of the oldest primary schools in the county. From classrooms heated with wood stoves to wireless Internet access, the school has reflected the changing community over the course of its 150-year history.

St. Clare’s history begins with Sisters of Notre Dame, who came to Santa Clara in 1863 after land was purchased to build a convent. According to newspaper articles, the nuns initially used a small building to conduct classes at the then-St. Mary’s Academy for Girls while their convent was being built.

“In 1872, a boarding school and refectory for the sisters were built,” according to a 1964 San Jose News story. “Soon 50 boarding students from the western states and as far away as South America came to study. In 1888 a day school for both boys and girls was built.” This location was used until the school was able to purchase a larger property to build on.

In 1921, St. Clare’s Church parish purchased the property bounded by Main, Washington and Santa Clara streets from the Phelan Sullivan estate to build a “parochial school, a hall and perhaps a church,” according to a Santa Clara News article. But it took four years before the Rev. Geo. P. Butler, S.J., the pastor of St. Clare’s church, to apply for a permit to erect the new school.

The new facility was intended to combine the new century’s state-of-the art construction with an exterior that spoke to Santa Clara’s Mission history.

“The Building will be one story and will cover a floor space of 71×205 feet,” reported a Jun. 6, 1924 article in the Santa Clara News. “It will be steam heated and all modern conveniences. There will be eight large classrooms, with a commodious assembly hall. The outside finish will be in stucco.” The school was dedicated on Oct. 21 of that year.

The decades following WWII marked the height of Catholic school enrollment in the U.S., and St. Clare’s needed to expand to meet a rising tide of baby boomers. The school raised funds to build a new convent in 1952 – one that would contain a chapel, three music rooms, living quarters and accommodations for the sisters teaching at the then 500-student school.

In 1964, the school celebrated its 100th anniversary. “Over the years, thousands of Santa Clarans attended the parochial school, including a number of city governmental officials, business and professional men, priests and current members of the order,” reported the Santa Clara Journal on Oct, 28, 1964. “It has also attracted students from out of the state and from beyond America’s borders.”

Despite the challenges that have faced Catholic education over the last 30 years, St. Clare’s has continued to thrive.

In 2006, the San Jose Mercury News featured an article about the school’s 150th birthday (according to the school, it began in 1856, however, according City Historian Lorie Garcia, there is no documentation of the school within the city at that time). “Fast forward 150 years and you’ll find a school community living in a building designed and built in 1924, equipped with wireless hook-ups, a multicultural community that mimics our state, a full service before-and-after-care program, and a staff dedicated to educating children in a caring environment.” At that time the school had 306 K-8th grade students.

As the years pass by, St. Clare’s school continues to retain its unique association with Santa Clara history. One thing’s for sure – the school and parish will be part of Santa Clara for generations to come.

Schools
Author Alissa SorotenPosted on January 13, 2023
Foster youth, homeless students, and students with disabilities at Santa Clara Unified School District were identified as needing help improving by the State of...