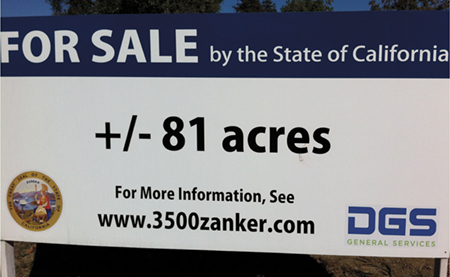 More than 100 people turned out on Nov. 6 to hear about the state of current efforts by Santa Clara Unified to purchase 59 acres of the former Agnews Developmental Center property from the state. Since 2009 the district has been developing plans for a new K-12 campus in the rapidly growing North Santa Clara and San Jose part of SCUSD.

The San Jose City Council has zoned the land for public use, and endorsed SCUSD’s plan. In 2012, State Assemblyman Bob Wieckowski introduced legislation (AB 503) that would authorize the Director of General Services that would sell land to local agencies at less than market price if the property is intended for schools. The legislation also specifically enables the district to buy the Agnews property on Zanker Road.

“Former Superintendent Bobbie Plough forged the relationship with Assemblyman Wieckowski,” noted Trustee Jim Canova. “And current Superintendent Stan Rose is continuing the effort.” In his role on the board’s legislative committee, Canova has visited Sacramento several times to advocate for the district’s needs.

The San Jose City Council has endorsed the plan – San Jose Council Member and candidate for State Assembly Kansen Chu has been active in advancing the proposal – San Jose would be a partner in developing other community facilities on the site. Congressman Mike Honda – a former teacher, principal, and school board member – has even weighed in and scheduled a phone call with Gov. Jerry Brown to advocate for the proposal.

It seems like everyone endorses the plan except the California Department of General Services (DGS), the agency that manages sales of the state’s surplus properties. The DGS continues to rebuff the district’s purchase offer in hopes of attracting a corporate buyer at a higher price.

And so the lobbying efforts continue.

Last night’s informational meeting offered more insight into the need for the new school, as well as into San Jose’s North Area development Plan, which has been rolling out for about 10 years.

“Because we are where we are, we would like to have a school that represents that [high tech] community…a school as a connective tissue that contributes to the entire community,” said Rose. It’s an opportunity to “think about school in an entirely different way and think about things we haven’t thought about before. We have to look at what all of our options are…but we are committed to putting in a competitive bid on this property.”

Student population in the entire Santa Clara Unified district is projected to grow 13 percent in the next 10 years, SCUSD Bond Projects Director Larry Adams told the audience Wednesday night. However, the school population on the north side of 101 will account for about two-thirds of that growth. The Northside has three elementary schools, one middle school, and no high school. All the remaining district schools – including unused properties that are currently being leased – are south of 101. 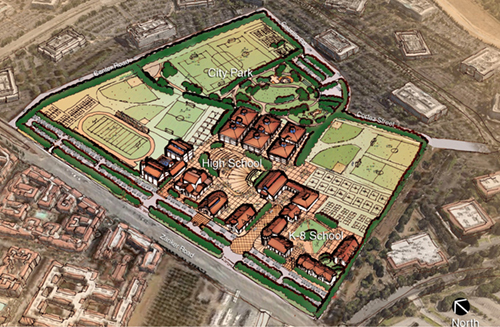 “In our analysis, we looked at four [Northside] sites,” said Adams. “This site came out as the optimum site for a K-8 and high school.”

If it can purchase the property at a fair price, the district has the wherewithal to build the new schools, according to Lori Raineri of Government Financial Strategies, Inc. The district has a record of capital projects coming in under budget, leaving $4.6 million currently available from Measure B, J, and H bond issues.

Using conservative projections of property tax revenue – 40 percent of California property taxes go to K-12 schools – the district could generate $443 million for capital projects with bond issues over the next five years, said Raineri. If the board approved a bond proposal, it could go to the voters for approval as soon as June 2014.

Santa Clara resident Peta Roberts sounded the one note of caution of the evening, asking what the “plan B” was if the district loses its bid for the parcel. “Instead of having a grand plan of 60 acres, have you thought about small schools? [Another] one of the big questions is: If you are bringing 80,000 people to the area, how are developers paying for schools in the area? Is there no levy by the City of San Jose, the district? I want to know what Plan B is.”

Although it wasn’t discussed Wednesday, part of the answer to Roberts’ question is California’s Community Facilities Act – better know as Mello-Roos – which allows local agencies to create special taxing districts for funding necessary public services like schools. Developer fees are also another avenue for increasing funding for infrastructure and services.

The entire Nov. 6 presentation is available on request from the SCUSD (www.santaclarausd.org) district office.