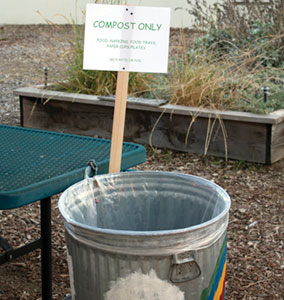 Going green is a big thing these days. As our City Council weighs the pros and cons of joining San Jose and Sunnyvale in a plastic bag ban, our schools are thinking of ways they can also join the green movement.

Many Santa Clara schools now have bins on campus for students to separate their recyclables from trash. Westwood Elementary has taken it a step further.

“School-wide we’re able to help kids now understand what the green concept is,” said Westwood Principal Andrew Lucia. “Students at lunch – the 500 students – separate their compost from trash. Anything that’s compostable – paper plates, milk cartons, excess food, all of that stuff – gets dumped into one container and through working with the City of Santa Clara and Mission Trails [Waste System], which is the refuse company, we are the first school in the district to get a compost bin. [Mission Trail] will transport that down to Hollister to process it and turn it into compost.”

At the beginning of the year, Westwood realized that it was important for the students to become aware of what was being sent to the landfill and how that waste impacts life.

“That first day that we did the division of compost and trash, I think it was like 163 pounds of refuse going out – only 25 pounds of that was trash,” said Lucia. “The rest was all compostable, which is pretty cool to be able to share that with the students. Now our challenge is to figure out how we can cut down on our compost waste and make sure that what we take, we eat.”

To do that, Westwood is encouraging students to take home food that isn’t finished at lunch to have as a snack later, and use reusable containers rather than plastic bags. One of the school’s Girl Scout troops is even helping out by collecting Capri Sun bags.

“They send them back to TerraCycle and they get a penny a bag,” said Lucia. “Last year, they got a refund check of $86, which means that our school generated 8,600 Capri Sun bags. And, all of that was prevented from going to the landfill. It’s not so much the money that comes back, it’s just having a gentler impact on what we do around here.”

At the school’s annual Fall Festival, which was held on Oct. 19, it made an effort to put out trash cans specifically for compost materials, as well as recyclables. In the future, the school hopes to have a green chairman role in its PTA. Additionally, instead of using plastic-wear, Westwood has switched to corn-wear, and instead of using polystyrene plates, it switched to compostable plates.

“Tonight we’ve made an effort to separate all the bottles and cans, all the compostables, from the trash,” said Lucia. “Our school wouldn’t be able to do it without the support of the parents and we have a couple of very strong, supportive parents getting it all done so it’s because of them.

Keeping Kids Safe, On Track and In School

Schools
Author Erika TownePosted on April 17, 2019
“Good morning, where’s the smile? Who’s ready for school?” Every morning, the students at Sutter Elementary School on Forbes Avenue are greeted by the...
Arts & Entertainment Schools
Author Melissa McKenziePosted on September 12, 2012
Santa Clara High School’s theater students desperately need help from the community in order to make their dream a reality. After initially hearing “no”...
SPONSORED