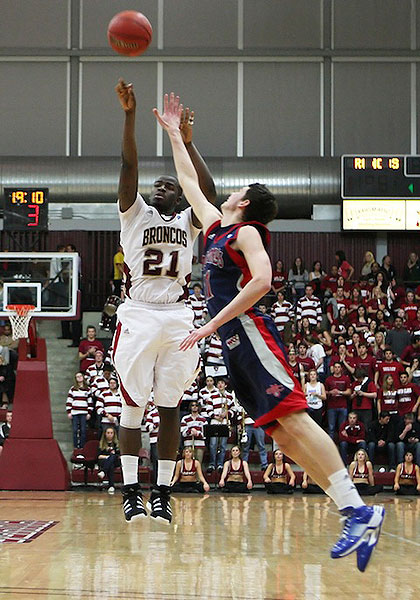 As a child, Santa Clara University sophomore, Kevin Foster, would play basketball and pretend to be on his hometown Houston Rockets in the championship game. Now, it appears that Foster’s childhood dreams may not be too far off. He’s had record-breaking seasons over his first two years as a Bronco and people outside of Santa Clara are talking about the guy who worked back from an injury last year to get to a high level of play.

“It was hard,” said Foster of returning, “but I had a lot of support behind me, which made it a lot easier. My dad, my mom, my brother, Coach Siara, the coaches, our staff just helped me stay positive and gave me a positive outlook on it and told me to keep working at it and that’s what I did and thankfully I got back to playing at a high level.”

Foster is the first sophomore in Santa Clara history to break the 1,000 career point threshold and broke his own single season 3-point record last week when the Broncos suffered a loss to rival St. Mary’s, but it’s not all about him. “I feel like individual accolades are good, but they aren’t the most important thing for a team,” said Foster. “It’s a team sport and the best feeling in the world, I just know – I haven’t been there yet – is to get to the NCAA tournament.”

It’s yet to be seen if the Broncos will make it to the tournament, but Foster is confident about the team’s future. “Our team is really young and we’re doing really well this season so the future is even brighter for us next year when we have three new recruits comin in who are really talented and can contribute right away.”

Foster can next be seen Saturday, February 19 against Portland on Comcast at 5:30 p.m. 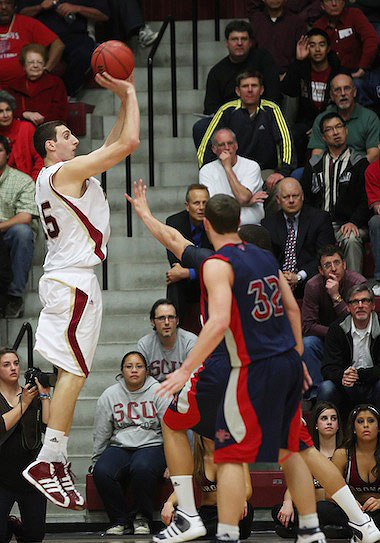 Having spent last summer playing for the Canadian National Team, Santa Clara University junior, Marc Trasolini was given the opportunity to play against Ricky Rubio and NBA players Marc Gasol and Rudy Fernandez of Spain. “It was a great experience…it was a great learning experience for me as a person and a player,” said Trasolini.

Trasolini, who credits his parents for giving him a love for basketball, hails from Vancouver, British Columbia. Whenever he hits a big shot or goes to the line to take free throws, Santa Clara University supporters’ group, the Ruff Riders, hold up a Canadian flag to show their support for where he’s from. “It means a lot when people hold up the Canadian flag for me, even people I don’t know, so they appreciate my culture,” said Trasolini. “It makes me feel honor and I’m happy to be from Canada.”

Next year, Trasolini, who will be finishing out his Santa Clara career, believes the team will be an even stronger contender. “My personal goals are first and foremost to win and secondly just to help the team any way that I can – scoring, rebounding, and playing good, solid defense.” He also plans to spend this off-season focusing on his own game. “This offseason I’m going to focus on getting a lot stronger because I haven’t focused on that as much as I would have liked with me getting sick last summer and playing with the Canadian team this summer so I think my biggest focus is to get strong, put on a little weight and keep working on my range and my versatility.”

When not on the court, Trasolini spends his time listening to music, notably fellow Canadian Drake, watching movies and playing poker.

Trasolini can next be seen on Comcast playing at Portland on Saturday, February 19 at 5:30 p.m.

Bringing the Community Together